Most FOT readers I’ve run into over the last few years are unique individuals – they like to be entertained, but look for some substance under the veil of snarkiness, skepticism, and comedy.  And in that substance, many dive for insights; insights that can help fine tune a current program or initiative … maybe even find a nugget or two that can help them get promoted in the future.  Yep, the FOT readers I consistently run into are not only smart, but driven Cookies.  And, oh yeah, they don’t mind reading a sentence that starts with “And” because they get it’s for effect.  #JustSayin.

So, let’s talk about getting ahead.  I mean, is there any science out there that beats the worn out motivational articles and musings on the color of your parachute?  YesSirEeeBob.

Before we dive in, let me ask a question.  With it, do two things: 1. Answer with your first answer, and then 2. Think about it some more and answer again:

Well, research now shows that Social Capital trumps Human Capital nearly every time – this means that you don’t have to be the smartest or most able person in the room to get ahead (sorry, I know this is different than what you were likely taught growing up, but it is what it is.)  So if you ever wondered why someone so dumb could be promoted to the job you should instead have in your company, now you know why.  I’d even toss out a Palin comment here, but it would be a joke more than a political statement, so I digress. 😉

In a 93-page Research Report by University of Chicago Professor Ron Burt, he explains that Social Capital provides a rigorous and stable model to describe “why certain people and organizations perform better than others.  In the process, new light is shed on related concerns such as coordination, creativity, discrimination, entrepreneurship, leadership, learning, teamwork, and the like … ”  These are performance issues (yeah, pretty big deals) he’s describing, and Network Analysis is the key to unlocking them. 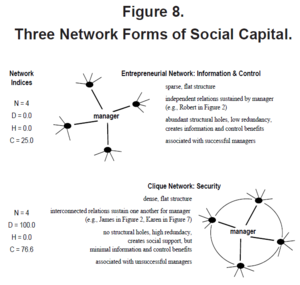 Oh, and just so you know that the stuff FOT brings to your doorstep is legit, what we’re discussing here is the focus of Ron Burt’s “Strategic Leadership” Course (Executive MBA) at the University of Chicago’s Booth School of Business.

So you’re probably thinking this sounds great, but what the bleep does it really mean? If so, you’ve come to the right place.  Here it is:

Social Capital, at its core, is a game of brokering Structural Holes.

What are Structural Holes?  They’re gaps (holes) between individuals or groups that you can bridge.  The individuals or groups may be aware of one another, but they’re not focused on tending to each other.  This is where you step in.  According to Burt’s research, “Structural Holes are then an opportunity to broker the flow of information between people, and control the projects that bring together people from opposite sides of the hole.”

The thing to keep in mind is that when it comes to getting ahead, your competitive advantage comes from information access and control.  Burt’s research proves (seri 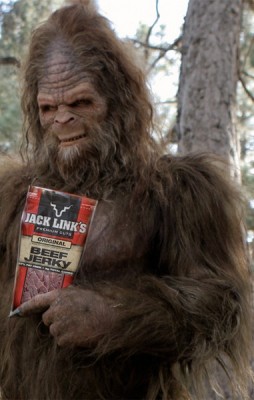 ously, dive into the research above and check out the level of rigor) that those who get promoted the fastest, as well as those that earn the highest bonuses, have a distinct pattern of gaining early access to, and entrepreneurial control over, information.  How?  Through identifying and strategically brokering structural holes.  Hey, having a little entrepreneurial-ism in your blood is a good thing, even if Hiring Managers are scared to hire someone whose had the stones (or cajones) to go it on their own . . . while they secretly dream of doing so themselves.

As I’m getting to my word count limit today, let’s end today with an image of 2 networks above – one of a highly successful leader and one of an unsuccessful one.  Check out the descriptions next to each and we’ll dive further in part 2 of this series.  A little hint before I run: If you think that being the “Social Butterfly” at work is your key to getting ahead, that strategy will yield you little to no more benefit than trading in your wings to become more like the Anti-Social, ‘Messin’ with Sasquatch’ fella who hasn’t had a haircut in a while and isn’t too bashful with his club arm . . . speaking of which, I’m willing we’d all like to have a dude like this for on-demand ‘special projects’ with late-paying Clients!  “Meet Trog, our new Accounts Receivable temp . . . “