Kids – mark my words.  You're going to get old, look up and realize you were once part of a great team.  You didn't know you were on a great team at the time because you were young and dumb. You thought it would always be like that.  You were wrong. 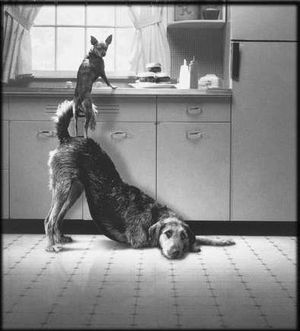 Why are you no longer part of that great team?  Because one of the following factors conspired to tear it all apart:

1. The world changed and, as a result, the team had to change,

2. The stars of the team got upset at each other over transgressions – real or imagined, or

3. You were clueless to how much that team rocked, left the company and then figured it out a decade later.

There's a word for all three examples – humanity.  If you get a chance tonight at  9:30 EST, check out the documentary Once Brothers on ESPN, which puts the humanity of teams on display for all who watch.  Here's the rundown of the movie from Slam Online:

"Before there was Yao Ming, Dirk Nowitzki and Manu Ginobili, there was Vlade Divac and Drazen Petrovic.

Those two teammates from the Yugoslavian national team paved the way for international players to play in the NBA.

In the upcoming ESPN 30 For 30 documentary entitled Once Brothers, Drazen and Divac’s basketball success, close relationship and the eventual tragic death of Petrovic are all on full display.

Told through the eyes of Divac, the main focus is the relationship between himself and Petrovic. We follow the two players from the rise of their careers in Yugoslavia, to their early success in the NBA, to the war within their home country that tears them apart and to finally, the tragic death of Petrovic.

Mainly, this is Divac’s story about how he deals with all of these things, most particularly the division that comes between him (a Serbian) and all of the Croatians that were once his teammates on the Yugoslavian national team."

The lesson in Once Brothers that transcends sports is pretty simple.  Great teams and great friendships are fragile.  The world can mess it up (war, corporate restructuring), but more often than not, individuals make decisions based on incomplete information, emotions and other factors that collude to separate great friends – and break the teams they're on.

My example?  I once was a part of a great National HR team.  We rocked the house of a Fortune 500 for 4 years, and I had an unbelievable SVP of HR and 6 other strong field VPs of HR running sections of the company in the field like me.   It was a dream team.  Then, the world got in the way.  The company went through a down cycle, had to restructure and our SVP got mistreated in the process – by one of my former peers who was elevated to a spot of authority based on her geographical location – a byproduct of the restructuring.

The restructuring and the resulting mistreatment was all it took to take down the team.  The group saw the way their former leader had been treated, and being a talented group, decided to get the hell out of dodge – 1 by 1.    POOF!  A great team, gone.  Humanity and imperfection – 1.  KD's Dream Team – 0.

Great teams are fragile.  It sucks, but it's true.  If you're on one, enjoy it.  It won't last forever, and you likely won't get the magic back again anytime soon.