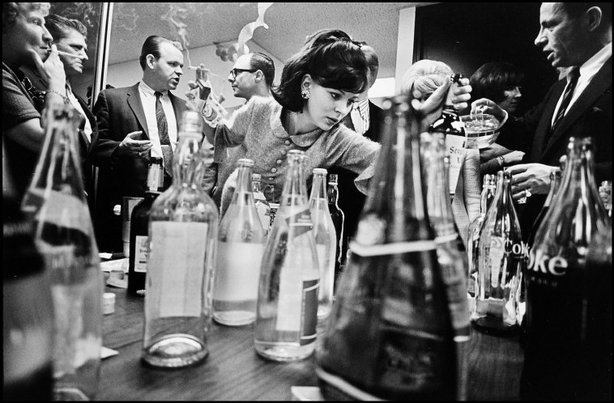 Fast Company had a recent article on the subject of office holiday parties (Office Parties: Breeding Grounds for Bad Behavior, Flings, and Unemployment) in which they reported:

40% of workers say they’ve either embarrassed themselves or know someone who has at a work holiday party. And a shocking 23%–1 in 4!–have been reprimanded for their actions.

Pink slips are almost as frequent as red faces. More than 1 in 10 Americans say they know someone who has been fired for their inappropriate behavior at a holiday party. This behavior may include saying something inappropriate to a colleague (7%) or boss (4%), or drinking too much (20%).

Which begs the question of you, the HR police: Should you serve alcohol at your office holiday party?


It’s a question almost every HR Pro has had to ask themselves or has been asked in their career.  At some point, an executive or the party planning committee is going to ask – well – should we? Can we?  Then comes: well how much? for how long? but what about Timmy who’s recovering, should we buy him some O’Douls non-alcoholic beer? (Notice the drinkers never want to say “maybe we shouldn’t have alcohol out of respect for those in AA, they would rather give them non-alcoholic options!).

I look at it this way.  Each company has its own culture – and it depends on your culture and what’s considered appropriate for your environment.  I worked for Applebees and they let me “taste” alcoholic drinks while I was working – to ensure product quality, of course.  When we had work functions, there wasn’t an “if” we could have alcohol, it was “how” much, “when” does it start and “what” vendor was paying the bill! Heck – with the financial year(s) some companies have had recently – many of you HR Pros might want to look into something stronger than just alcohol at this years holiday party (hello, California Prop 19)!

A couple of things I know for sure as you ponder whether to go dry or let the merriment flow:

1. You are not going to make everyone happy – so don’t try.  Make the “right” decision for the masses. The worst HR in the world is when you make a decision based on one squeaky wheel. “Well, this year we aren’t going to serve alcohol because Mike found religion and doesn’t agree with it any longer – but I’m sure the rest of us (435 employees) will be alright with it.” No they won’t – they found religion too and their religion lets them drink!

2. Having alcohol at your party might be the worst professional decision you’ll ever make. What!? But you just said…  Let’s be clear, some very bad things can happen, and you are responsbible – you’re the HR Pro – you are advising your executives.  If you gave people an option of having two drinks or a $50 Best Buy card – which would they choose? How much safer is that for your organization?  Don’t take this decision lightly!

3. You need to be the chaparone. If you decide to have alcohol, someone has to be the adult, and since you are probably going to be the one leading the investigation after the fact – well, it might as well be you.

So, I’m having alcohol at my office party – not everyone drinks – most do – at least a few might not show up because of that choice.  I’ll have fun, the group will have fun, we’ll celebrate our successes for 2010 – then I’ll go home and I’ll cross my fingers and hope everyone makes it home safe and sound.