Gather round the HR Tractor campfire, y’all – it’s time for a square-dancin’ rant or two.  Don’t be scared – just let your feet go and “Dosey Doe“.  It don’t have to be pretty the first time.  All you have to do is hop up from your chair, clap loudly, approach your partner and circle to the back, and then return briskly to your ‘original position’.  If you prefer Lil Jon, screaming “Whaaat?” or “Yaayah,” will work just as well.  If you have an auto-tuner and like to practice sounding like Lil Wayne, or better, Lil Jon Wayne, I don’t even want to know.  Just don’t hurt anybody 🙂

The truth is that by the time you read this, I’ll have just arrived into Bangkok and will be leaving shortly to an Elephant Sanctuary at Chiang Rai for a part of our Honeymoon.  Lil Jon and Elephant pimpin’ – that’s how we roll at FOT.  In other words, I’ll be too far away for any offended HR Pro to come and give me a piece of their mind… and given my limited web access, I’ll miss any flaming comments since I’ve recently learned that the half-life of a blog post is only 36 hours.  In other words, I’ll be safe and riding an Elephant (albeit not quite like Hannibal, but close!).  Without further ado, let’s get to it:

1. Stop crying about “Influencer” lists already.  The root of most of the complaints about these lists is really that the person complaining isn’t on one – it’s as simple as that.  So, if that’s you, step your game up.  You can do it – I’m proof, as I made one of HRExaminer’s recent “Top 25 Most Influential Online Influencers” list, and they don’t even have my blog correct (yeah, I tried to repeatedly request a fix, but never received a response.)  Why can you get on a list?  Because most of these Vendors, Consultants, Magazines, etc. are using nothing more than ‘Buzz Metrics’ engine to mathematically identify influence – in other words, they count crap (like # of Twitter Followers, # of Tweets, # of YouTube views, # of Facebook Friends, Likes, and Comments, etc.)  Since they’re not using real science (like Social Network Analysis) to identify where the influence really lies through the pattern and nature of connections (and in what ways it’s spreading through a conversation network), this means you can easily game the numbers and get on the list.

2. Please, do we really have to compare the value of an MBA to a PHR/SPHR?  I mean, is this what the HR World has come to?  It seems like I hear, see, or read Executives complaining each day about HR lacking any level of business understanding, so what do we do in response?  We pursue a PHR/SPHR certification and a degree from “Twitterversity” as if it matters to anyone but ourselves.  Newsflash: Execs don’t give a hoot that you have a PHR/SPHR – only other HR Peeps do.  Unfortunately, it’s probably the ones doing the hiring; yeah, the same individuals perpetuating the same circle of mediocrity.  The best thing to do is get the PHR/SPHR and a degree from Twitterversity, but also apply yourself and earn the MBA as well, particularly if you can go on your company’s dime.

3. Social Media is here to stay and Candidates are pretty darn good with the tools… so how about your Organization dedicating some time to getting it right?!  Focus on the bigger trend – Social Media is an extension of a better designed “Social Web.” People today use the Internet to interact more than consume content; we like to interact with others more than read stuff.  And the stuff we do wind up reading normally comes from a recommendation of someone we like or respect.  Why do I mention this?  Because Candidates know a crap employment brand when they see one – just sayin’.  “Build it and they will come” didn’t work in the dot-bomb era, and nope, it still doesn’t work today.  You might be the best company in the world, but if you use Twitter to broadcast jobs and have a Facebook group or page for careers at your company that people can’t even post a comment to, you might as well dump your entire Social Media program.  If a Candidate can’t interact with you or your brand, you’re not fooling anyone but yourself… and yeah, it matters.

4. Speaking of tools, they’re not magic bullets… and Recruiting is still built on a foundation of personally connecting with other Human Beings.  At its core, Recruiting is still a game of persuasion and human relation, not technology.  Yep, we still have to actually do something – sending a Candidate a rejection text message is pretty foul, just like sending a snail-mail letter was years ago (except this time, the Candidate has to actually pay for the text message!)  Auto-dialers to pitch “hot job openings” to Candidates through a recorded telemarketing approach is still as utterly impersonal as it was yesterday.  I mean, really?  Have we become so obsessed with ‘efficiency’ (or laziness) that we can’t make individual calls to Candidates?  Here’s the acid test: Ask how you yourself would feel if you got a rejection text message or a telemarketing (recorded) sourcing call.  Today’s infatuation with tools is turning us into Tools ourselves.  So use the tools; don’t become one. 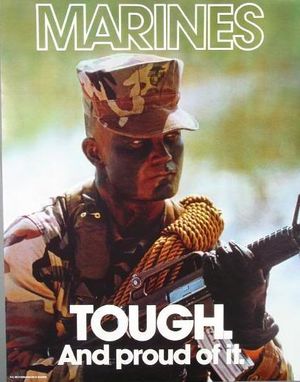 5. If you have a Veteran Recruiting Program/Initiative in place, dump it unless your Leader is a Veteran himself or herself.  Or better, send the Leader away on another assignment and hire someone who has been there.  Seriously, seeing non-Veterans lead Veteran Recruiting efforts is worse than watching a really dumb dog chase its tail for hours on end.  Further, it’s insulting to anyone who has ever worn the uniform.  I used to be shocked when I’d see Leaders not hiring actual Veteran Recruiters to hire transitioning Veterans; now I realize it’s the status quo.  The Leader doesn’t know what they don’t know, so of course, they hire Non-Vets just like themselves.  So how about this for some “maverick thinking”: Instead of hiring Recruiters (who have never walked as much as an inch in a real Vet’s shoes), thereby dumping tens of thousands of dollars in staffing spend on teaching those Recruiters how to relate to, deal with, and “understand” Veterans, just hire a Veteran himself or herself to do your Veteran Recruiting.  You’ll thank me later.

The truth is that I’m just getting started… but I’ve got Elephants and Honeymoon action on my mind.  Whoa, that didn’t sound quite right, but I might as well leave it as is – after all, I won’t be around to catch the comical backlash for a couple weeks 🙂  Dosey Doe, Y’all! (in my most Jersey accent, of course.)