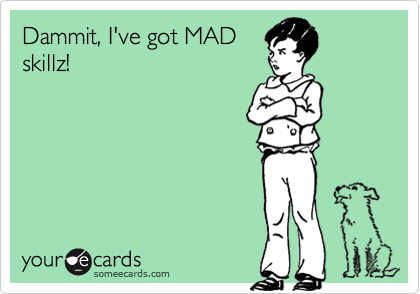 I was recently on a discussion panel for job seekers with my colleague,@HeatherMcGough.  A participant asked a question about resumes and like many recruiting types, Heather told the group that she does not like skill based resumes.

And it got me thinking.  I see skill based resumes all the time.  I’ve never really given them a second thought.  I look at them and I scroll down through 3 paragraphs of skills to find the actual experience.  I’ve never really stopped to acknowledge this fact: I HATE these resumes!

I bet you’ve seen the ones I’m talking about.  They are often only one page in length, beginning with a category like “Skills” or “Qualifications” or something similar.  In this category, everything is listed that the applicant has done in his or her entire life in the hopes that one of their key words will grab your attention or at least the attention of your search engine.  Near the bottom of the page, you will find the employment history, complete with company, title, date… and nothing else.

It’s no secret that recruiters use a series of keywords to track down potential candidates.  Particularly in the technical world.  We look for certain tools and we often move on if those tools are not found on the resume.  Technical resumes often include a section of skills at the top.  But, it’s two or three lines before moving into the experience.  This is a great practice that highlights the keywords for our search, but then quickly jumps into the meat of the information: the actual experience.

However, when I simply see a ton of “skills,” I don’t know where this knowledge was obtained.  Through real world, hands on exposure?  Was it learned in school?  An internship?  Maybe this person watches a lot of Discovery Channel and saw a documentary?  Just because I love Shark Week doesn’t mean I can add “chumming” to my qualifications (or does it?).  It’s awesome that you have sales experience!  From where?  At McDonalds selling happy meals? What were you selling when you exceeded your sales goal?  You worked at Starbucks.  Awesome!  In the store or in the corporate office?  Is that where you learned your “customer service skills?”

A recruiter is left with a lot of questions.  On one hand, perhaps this is a way for an applicant to potentially open a door and talk to a real person.  As a recruiter, the only way to get more info on some of these questions is to pick up the phone.  I might just do this.  Or… I might be busy and rushed and I might feel like my time is better spent calling this next person whose resume is more clear.

ProvenResumes.com makes an argument in favor of Skills Based resumes.  They say that funky experience on a chronological resume will turn off a potential employer.  They give the example of Sharla who was a full time teacher doing part-time sales.  Apparently, Sharla was hired at Microsoft through her skill based resumes.  For the record, I don’t know Sharla.  But, I am willing to bet that the recruiter needed to dig to find this information rather than clearly seeing on her resume that Sharla, “generated an income of $30,000 from part-time sales.”  They also refer to people attempting a job change.  But, a person doesn’t magically become qualified simply because they alter the format of their resume.

So, this trend needs to die (for that matter, so does Bieber Fever, but that’s a topic for another blog).  I don’t know who started it, but I question if they were a recruiter.  I want to know what you’ve done and where you’ve done it.  Period.  I don’t want fluff.  I don’t want fudging.  The manager and I will decide if your skills translate.  We won’t be fooled by an attempt to disguise a person’s lack of experience by burying their background in “Skills.”  Give me a solid chronological resume, any day. And recruiting friends of mine? You better be preaching the same…