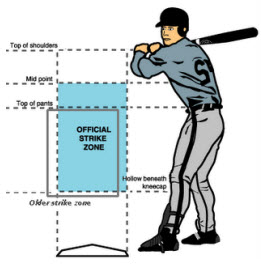 My son plays high school baseball.  He earned a varsity letter his sophomore year and gets a lot of playing time.  I’m assuming that the coach wouldn’t put him in the game if he wasn’t adding value to the team.  He plays shortstop mostly.  Some 3rd base and he pitches pretty regularly.  I’ve been told he’s pretty good.

Now, if your child has never pitched in a high-stakes game you can’t understand the pressure you feel as a parent.  It’s like they turned off all the lights in the ball park and put a single spot-light on the mound and one on you in the stands.

Two pinpoints of light – you and your kid.

Everything else fades into the background.  From that moment on everything in the game is a direct result of what your kid does.  Good or bad.

I give you that background so you can understand my frustration at baseball games when my son takes the mound and is pitching.  The spectators want to help.  They yell encouragement from the stands.

Here’s what they yell… wait for it….

I bring this up because I’ve seen many a manager offer this kind of advice during reviews and when trying to guide behaviors.  How many times have you heard someone say “Write better.” “Communicate more clearly.”  “Be more helpful.”  Those aren’t actionable comments.  That’s like telling a kid to “throw strikes.”

The problem isn’t the outcome.  Everyone wants to be good at their job.  They want to write more clearly and be more helpful.  Telling them again about the outcome you want isn’t helping them get to that outcome.

My son’s coach never yells, “Just throw strikes!”  He knows that is stupid.

What he does do is talk about mechanics – release point, foot placement, timing – the things that lead to strikes.

Look at the individuals on your team and the outcomes you want.  What are the things that need to be done that add up to those outcomes?  Is someone’s writing too loaded with jargon?  Is the organization of an argument a bit too obtuse?  Is someone’s idea of “helping” different than everyone else’s?  You need to dig into the issue and find out “why” the outcome isn’t happening.

As a manager, you are the one who is tasked with getting the behaviors aligned with the outcome.  Your job is NOT to reiterate the outcome.

Most employees pretty much know the outcome you want.  Repeating it more often and in a louder voice doesn’t change the behaviors that lead to the outcome.

As a manager are you looking at the mechanics of the outcomes you want and focusing on those?

Or are you a parent in the stand yelling “Just Throw Strikes.”