Like fellow FOT blogger, Steve Boese, I got a rejection letter yesterday from SHRM regarding a proposal Kris Dunn and I sent to speak at SHRM National 2011 in Vegas.  I knew it was a rejection letter before I even opened it because, you know, it was the thin envelope. One piece of paper, standard 3 paragraph – intro, body, conclusion – very 8th grade language arts appropriate, with two signatures using different ink to make it look hand signed – a very official mass produced rejection none-the-less (see pic below of actual letter).  I have to be honest – besides multi lame attempts at bars, I never really have been rejected at anything (I’ll save Dunn’s basketball comments and rejecting my shot for a more light-hearted post).  In college I only applied to two schools – Michigan State University and Western Michigan University – got accepted at both, then filled the 1979 Mustang with my clothes and skis and drove to the University of Wyoming and enrolled.  I like that UW didn’t even seem to have an acceptance or rejection policy, at the time, just show up and pay the bill – congrats you are a college student!

Even with marriage – I asked my wife to marry me – she was the only one – after a great presentation of my pros and how I planned to overcome my cons, and even she reluctantly accepted.   Every interview I’ve ever been on – in person over my entire career, and I know this is very hard for you to believe, I’ve gotten an offer.  Hell, I usually win those stupid gas station scratch and win pickle tickets – what can I say, my life has been charmed. 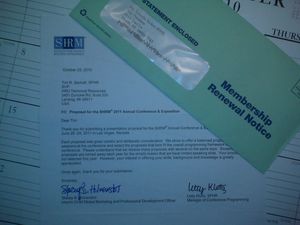 I looked at the envelope sitting on my desk and thinking how I was going to call Kris Dunn, my mentor and one day possible life partner (and I say that assuming we out live our spouses and live in the same senior center together, sharing a 2 bedroom apartment because our kids have milked all of our money away).  Kris isn’t like me, he’s fragile, he’s like the white soft cute snuggly kitten stuffed animals he’s keeps in his office.  Kris is also, well, on the edge. Rejection has been a major part of Kris’s life – growing up a poor black child in Northeast Missouri and having to travel with the Circus most of his youth, well, there’s really nothing left but a scared, lonely child in there.  I just didn’t know how to break this news to him.

So I left KD a message with the bad news because let’s face it – I’m in HR and confrontation isn’t my strength and I couldn’t handle his tears.  After what I’m sure was a good 2-3 hour cry, he called me, really still in disbelief.  How could this happen? What were they thinking? All the questions came pouring out all at once. I had no answers, just a soft shoulder to cry on, and listening to ear.

As far as I can surmise, SHRM just hates us.  I mean, I’ve been a dues paying member of SHRM since 2001 and Kris about the same – both us of sporting that SPHR badge we have held so dear to our hearts.  Here we were, two HR Pros, I mean really two friends living a dream, wanting to go unpaid and share our wisdom, share our souls, with our brothers and sisters at SHRM National 2011.  Trench HR – bringing it right from the streets to Vegas – sharing what really needs to be heard, needs to be said in HR.  In the last moments, getting our hearts ripped from our chests and thrown to the ground like a first year HR vendor on the floor in booth 968 – so far in the back, they didn’t even get one person to register for their iPod Shuffle.

So, I ask one thing from you (FOT Nation) – please help me, help you – I think an email and twitter campaign is in order to voice our displeasure of this great injustice – and I think it needs to be heard at the highest points of SHRM’s leadership – yep – China Gorman – what!? What the hell happened to China!?  Ok, the highest levels of SHRM’s Leadership – Gerry Crispin – what?! Gerry isn’t with SHRM – he speaks at everyone of their conferences. Oh crap, you know what I give up, I’m just going to wear this rejection like a badge of honor – I got turned down by the only professional organization I’ve ever belonged to –  now where is that 2011 SHRM Membership renewal notice that came in the same batch of mail…?

As you get ready to drop $2000 for 2011 SHRM National Conference, just remember what you could have seen – KD and I were going to present “Raise Your HR Game by Thinking Like a Money-Hungry VP of Sales” and in classic FOT style it would have been fun, it would have been educational, it would have been a little snarky and it would have been a packed room – but most of all it would have been completely different than every other SHRM presentation that was being given. Because really, that is what SHRM is lacking – the trench HR voice, real practiticioners (not people who did “personnel” 20 years ago and have been on the speaking circuit since) and just some fresh perspectives in how to do HR better.  As much as SHRM wants to believe “they know next” – their actions speak louder than their words – SHRM doesn’t know next – they know how to do the same ‘ole, same ‘ole.  So, have fun in Vegas learning about this new thing they call Twitter and Employment Branding and Candidate Experience and you get the picture…