Unless you’ve been in isolation from the outside world this past weekend you’ve no doubt heard the hub bub over the impromptu press conference held by Presidents Obama and Clinton last Friday.  Far as I can tell Obama is being universally panned for this move with some going so far as to say he’s officially “jumped the shark” and his Presidency will never recover.  Maybe, maybe not.  But what Obama has 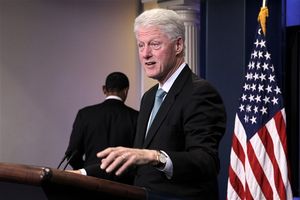 given us all is a lesson in leadership on what to do and what not to do, which I think is relevant for us as HR Pros.

The Good – The Ability to Learn and Reflect on the Past


Here’s my dramatization of what happened.  Obama wakes up sometime in the last week and says to himself, “Man, this business of extending the tax cuts in one tough s.o.b to solve.  I’m damned if I do, damned if I don’t.  Sure would be nice if there was someone who’s dealt with a similar problem I could bounce some ideas off.”  Enter on Clinton.  Love em’ or hate em’ he’s one of only 4 living guys in the world who can understand Obama’s challenge.  This is exactly the kind of behavior I want my leaders to exhibit.  Facing a tough problem?  Seek out advice from someone who’s been there before, try and learn from the past, brainstorm, or just get some support from someone who understands what you’re facing.  I mean come on, hasn’t every one of us been in a similar situation at some point in our lives?  Of course we have.  It’s not a sign of weakness, rather a sign of maturity.  And as HR Pros, it’s our job to make sure that learning and reflecting on tough problems, even if it means bringing back figures from the past is 100% supported within our organizations.

The Bad –  Having a Weak Leadership Bench


I loved the move of bringing Clinton into the press briefing room because to me that’s a sign of a leader confident enough in his own skin to not be afraid of taking a risk.  That is, until about 5 minutes into it when it’s become clear Clinton is enjoying it up there.  Like, really enjoying it and isn’t stopping anytime soon.  Now you’ve got Obama standing off to the side looking like he’s just outsourced one of the most important issues of his Presidency to Clinton.  This is where Obama’s leadership team failed him.  Robert Gibbs or any member of Obama’s press staff should have intervened and exercised their leadership and gotten Obama out of there or just cut the whole thing off.  But they didn’t act.  Not 5 minutes in, not 10 minutes in when Obama awkwardly leaves the podium and not 20 minutes later when Clinton ignored Gibbs and took more questions.  This failure to act created the type of imagery that can sink you as a leader – the appearance of walking out on tough problems.  Yes, Obama probably should have known better, but to me the issue is more about the systemic development of leadership.  This is why, in our own companies, it’s not enough to only invest in developing the top guys.  You don’t get any points in my book for doing that – it’s easy.  What’s much harder, but equally important, is making sure we develop a culture and training infrastructure which holds everyone accountable for taking action if they see something veering off track, from the most junior person on up.

Who knows how this will end for Obama?  But we are going to face issues like this in our organizations – all the time.  Our job is not only to create the environment to prevent things like this from happening but to also cut through the b.s., help analyze what’s really going on and get our organizations to actually learn from it!