“You know what they feed people on an indi set, Vinnie? Nothing! They don’t give you a trailer. They tell you to go sit on an apple box. Ever try to do the things you like to do on an apple box?

–Ari Gold from Entourage, Trying to influence a client not to take a job…

Do you read Mark Suster?  He’s a former Entrepreneur turned VC who writes a lot from his lens of the world.  I’ll stop the description there, but check him out and subscribe for a good read from a perspective we all need.  Just don’t go there until you read this post.  Because it’s all about me, OK? 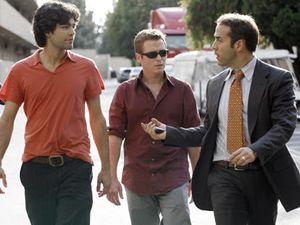 competition with VC’s.  As Mark points out, there are several ways to go, from the good ole’ “our competition sucks” to the “as you can see from this diagram, we’re strong and they’re significantly weaker”.  Having heard hundreds of pitches, Suster’s an advocate for the fresh approach – a real contrast of strengths and weaknesses.

You’re a recruiter, so you get paid to get candidates to sign on the line which is dotted.  One barrier to closing the deal as a recruiter is related to what Suster describes – sometimes candidates, pesky as they might be, have the nerve to shop their talent around.  They get your competitors involved in the chase.  Next thing you know, you hear the following passive-aggressive quotes in your conversation:

–“I’m looking at Acamend as well.  I hear they have sweet office space.”

–“Thanks for the offer.  I’m expecting an offer from Acamend tomorrow, so I’ll get that and give you a call the next day.”

–“I’ve got friends who work at Acamend, it seems like a great place”.

Notice the trend?  None of the above you might hear from a candidate are actually questions.  They’re statements.  They’re also invitations for you as a recruiter to pontificate on what you know, and how your company is a better fit for the candidate in question than the competitor, which in this case is Acamend…

You’ve got a choice to make when you hear those statements.  You can either be soft and ignore them or fully engage in an effort to compete against Acamend in the candidates’ mind.  Regardless of the actual strengths and weaknesses between Acamend and your company, here are some things your pitch should include:

1. A positive statement about the competitor.  Are you just another recruiter slinging it, or do you want the role as a trusted advisor?  That may be a stretch, but finding something sincerely positive to say about the competitor is a great start.  And no, saying they in fact do “have great office space” doesn’t count.

2.  Position yourself as the agent.  It’s easy to say “You’re kidding me, right?  They suck”, but at the end of the day, the best recruiters position themselves as the candidate’s agent by actually pondering the fit for the candidate.  That means you have to ask open-ended questions about what’s in the candidate’s head regarding the decision and be nimble enough to respond – to whatever comes out of the candidate’s mouth.

3.  If you’re leading the race, don’t talk too much.  At this point, you’ve said something positive and asked some open-ended questions.  What you’ve heard back suggests that you’re the right fit and you can break it down accordingly in your response.  Do that and then go for the close – no more open ended questions, sparky…

4.  If you’re behind in the race, expand the horizon.  You’ve been positive and asked some open ended questions and one thing is clear – you don’t stack up well based on what the candidate has said initially.  What do you do?  Expand the horizons and start treating the candidate like a Soviet bureaucrat – ask for his/her five year plan.  If you stack up poorly, it’s your only chance to change the game.

5. Figure out what it’s going to take to close.  Regardless of the stage you’re in, understanding what it’s going to take for the candidate in question to make a decision between you and the competitor is key to you being able to close.  Will money drive the decision or do soft factors like work flexibility or career prospects play a role?   The candidate is the one who brought it up, so now is the perfect time to get in their head about how they’ll determine who wins in a tie.

Ask questions and be nimble in your responses, and you win.  Just make sure your questions are more open ended than the ones Ari asks…