You gotta love the first week of the New Year–gyms are full, treadmill salespeople are cashing mongo commission checks and Whole Foods is overrun with reformed Twinkie eaters resolving to go organic. Confidence is high after a brutal 2009 and 2010, but a lot of companies, and by extension their HR departments, are still thinking more about exit strategies than they are about commitment. From Newsweek’s Companies Have Cash Hoards but Nowhere to Spend:

“…what’s also new this time around is the extreme caution firms have retained about spending, even as the recovery continues to unfold. In the U.S. in particular… firms are simply sitting on piles of cash. ‘Companies were caught in a near-death experience,’ says Ruchir Sharma, the head of emerging-markets equity at Morgan Stanley. ‘They are overcompensating… because they were caught short in the crisis.’”

As a result of almost getting burned, companies are playing it too safe. Is that happening where you work? Do me a favor and think about how you approach risk as an HR pro while I lay out two extreme examples.

First up is Clark Griswold from the first National Lampoon’s Vacation (1983). Griswold plans the perfect cross country family vacation to Wally World, but for 90% of the movie, the road trip is a parade of misadventures and misery, and the family cries tears of joy when they finally arrive at the fictional theme park. Here’s the kicker: as they pull into a huge empty parking lot, Clark parks the metallic pea family truckster as far away from the entrance as possible, even though there are thousands of closer spots and his is the only car in the lot. Check the dialogue: 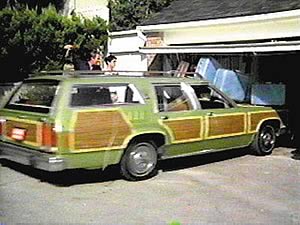 Ellen: But (we parked) so far away, Clark.

Clark: And, at the end of the day, when the lot’s all full… and everybody’s fighting to get out of here… we’ll be the first ones to get out, too!

I think you know some HR teams that run this way— even when the prize is finally in sight, they think exit strategy first. Makes me think of Paul Hebert and his idea that HR plays too much defense and can get in the way of advancing the business.

But if Griswold is at one end of the risk spectrum, Xiang Yu – of the Qin Dynasty, for the uninformed – is the other. In the battle of Julu in 207 BC (yep, history lessons for you on FOT) Xiang and his small army were on their way to a butt kicking by a much larger army. As they crossed the last river before the battle, he ordered his men, “Break the woks and sink the boats.” The message was clear: the objective is in sight, we’re fully committed. No parking at the end of an empty lot for Xiang — the guy was all in, and they won the battle.

So, let me ask you – how are you approaching 2011? Are you leaning more towards Clark and exit strategies or are you making a commitment? HR has a reputation for playing safe, but I wonder if some HR folks are going to win support in 2011 by pushing leaders to take some risks. Could that be you? Maybe. And if so, just repeat after me – break the woks!