Last September, Stephen Elop, former Head of Business Development at Microsoft, was hired into Nokia as their new turnaround CEO. My guess is that he took the last few months to assess the true challenges he was looking at. They are steep, make no mistake. Apple changed the mobile game and now owns the high-end market, growing from 25% market share in 2008 to 61% today. That’s dominance. The Android platofrm is also making a huge dent within the mid-range market in less than two years, and Google is an absolute Recruitment masterpiece. Good luck competing on that front. And the low-end? Not much better for Nokia. Companies in Shenzhen, China are manufacturing phones for less than a Mountain-Dew Big Gulp (specially designed for those of us who need more than 75 cups of coffee in a single setting.) 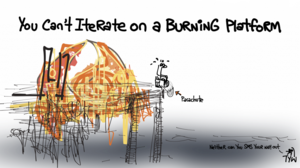 So what did he do?  He observed, he watched, he spoke to staff members, he assessed the current Management cadre, and he realized there wasn’t much choice in terms of what he had to do next.  His first course of action would be to clean house, but first, he put together an email (more likely an internal blog post) more jolting than a super-charged defibrillator. Some of you may be familiar with it. Mark my words, Mr. Elop knew there would be collateral damages. Big deal. The situation for Nokia is too dire to play nicey-nice diplomacy. The now infamous email has been the scourge and spice of commenter criticisms ranging from poor leadership to crappy communication skills. And I absolutely love it.  We all should.

Here are my favorite excerpts, along with some random thoughts of my own:

While competitors poured flames on our market share, what happened at Nokia? We fell behind, we missed big trends, and we lost time. At that time, we thought we were making the right decisions; but, with the benefit of hindsight, we now find ourselves years behind.

This can happen at a juggernaut firm with an old-school hierarchical command-and-control structure. Change is resisted and new ideas are crushed in their infancy as the Halo Effect of yesteryear’s success reigns. When the firm finally catches up to the true reality they’ve been ignoring, you have a slew of Senior Executives leaving the building for good, pink slips and golden parachutes in hand… while Shareholders wonder what’s next, not to mention how a guy like Bob Nardelli can legally roll out of the building with a sack of $210 Million greenbacks in it.

We have some brilliant sources of innovation inside Nokia, but we are not bringing it to market fast enough. We thought MeeGo would be a platform for winning high-end smartphones. However, at this rate, by the end of 2011, we might have only one MeeGo product in the market.”

When it comes to Innovation, brilliance isn’t enough. The ability to move ideas through the NPD funnel quickly, getting prototype developed, and then a final product to market in as short a time as possible is what matters. Sure, talent and bright people are important… but I’ll take urgency and speed-to-market over slow-moving brilliance any day of the week.

The battle of devices has now become a war of ecosystems, where ecosystems include not only the hardware and software of the device, but developers, applications, ecommerce, advertising, search, social applications, location-based services, unified communications and many other things. Our competitors aren’t taking our market share with devices; they are taking our market share with an entire ecosystem.

Sound familiar? Nokia’s challenge is that it’s trying to fight a device war, when the ecosystem trumps the individual device. It’s like looking through the Human-Capital lens on a person-by-person basis when it’s the network of all our people interacting together that truly drives performance in the market.

How did we get to this point? Why did we fall behind when the world around us evolved?   This is what I have been trying to understand. I believe at least some of it has been due to our attitude inside Nokia. We poured gasoline on our own burning platform. I believe we have lacked accountability and leadership to align and direct the company through these disruptive times. We had a series of misses. We haven’t been delivering innovation fast enough. We’re not collaborating internally.  Nokia, our platform is burning.

In a world of leadership punchlines that revolve around keeping everyone copacetic and walking the line, a leader with the gumption to take a stand and admit the realities facing the Organization is a true rarity.  The only way Nokia can clean up its act is to admit what’s wrong and get to working (albeit painfully) on the root-causes.

We are working on a path forward — a path to rebuild our market leadership. When we share the new strategy on February 11, it will be a huge effort to transform our company. But, I believe that together, we can face the challenges ahead of us.  Together, we can choose to define our future.

Mr. Elop finishes with a call-to-action that is about transformation. This is a big deal – it means that the status-quo Cow has left the room… and isn’t coming back. You’re either on the bus or you’re off, no half-stepping. And if you’re in, we’re starting now, right now, right this second. Together, let’s make it happen. 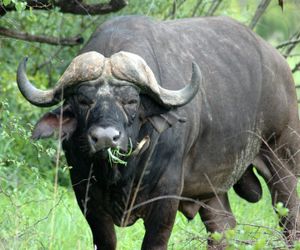 So let me ask, could you recruit for Nokia given this “leaked” email? I’d like to believe I could. In fact, it might become my biggest recruiting tool. Given that Nokia truly is on a burning platform, wouldn’t you want to be a part of the transformation? How good would it feel to you to play a key role in turning things around? Nokia used to be the Big Wolf on top of the hill, and when you’re Big Wolf, you always eat first. The problem with this is that you forget what it means to be hungry… and hunger is what drives greatness. I think my first line to a potential Candidate would be something like this: “So now that you’ve read the email I sent over, let me ask… Just how hungry are you?”