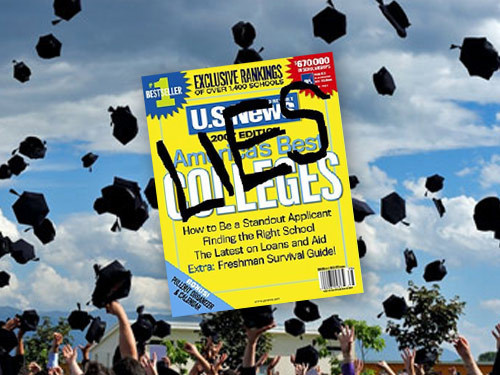 Growing up, my grandfather ended almost every conversation with his grandkids by saying, “Get good grades–go to college.” In the same way that other people said, “Goodbye,” he would say, “Get a degree.” To him, a college diploma meant an all-access pass to a wide world of career choices he could only dream about. He did not think it mattered what college or which degree–a diploma meant you could do anything.

Unfortunately, a recent article, Brown and Cornell are Second Tier says that Gramps was dead wrong. Research from a Northwestern University professor claims that what school you went to is the deciding factor to some recruiters when they vet candidates. Is this you? Are you a school snob that overvalues the name brand of the school a candidate attended? If so, the article refers to some of your peers as “ridiculously narrow-minded people who make hiring decisions,” and notes:

What’s surprising isn’t that students from elite universities have a leg up; it’s that students from other colleges don’t have a chance, even if those colleges are what the rest of us might consider elite. You also can’t read this study without getting the feeling that the game is rigged. That obtaining a name-brand diploma matters more than actually learning something. That the gatekeepers at our nation’s most prestigious firms are pathetically shallow, outrageously parochial, and insufferably snobbish.

Academic research and empirical evidence come together to prove that some recruiters are lazy and shortsighted. Fantastic.

Now, I know that school snobbery is nothing new. There is some manager in every shop who looks at a résumé, sees a “top” school, and automatically prefers that candidate over the state school grad–even if in reality the top tier kid partied his way through the Ivy League like Charlie Sheen on a Vegas bender.

When I run into that manager, I frame the discussion by asking, “What data do you have to show that grads from insert school perform better than grads from other schools?” I typically get blank stares and Maurice Jones Drew-esque backpedalling.

Faithful FOT readers are not lazy and don’t fall for this nonsense, but in case you have colleagues acting like the ridiculous recruiters quoted in the article, please get some data to help them:

If the quality of a candidate’s education is important to your firm, measure it compared to performance, not just the perception of a pedigree. If you can show that a chunk of your high performers came from one or two schools or that a large percentage of grads from other schools struggle within your firm, you just went from snobbery to evidence-based decision making, which would make Gramps proud. In high school, they were just jerks, but in HR departments, snobs are just dangerous.