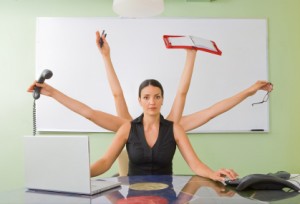 Recruiting blogs often talk about the Purple Squirrel; that super niche role that only one person in the entire universe can fill. Or, that big honcho executive who’s a really tough close that keeps you negotiating until you’re handing over the keys to your Miata.

Child’s Play, I say to you. These people are nothing! A challenge just like any other. One we are well trained for and often anxious to tackle.

Instead, I offer this: the most challenging position to recruit for and to hire is the Executive Administrative Assistant.

I have had to hire quite a few admins in my career (ironically, as I type this, I was just informed I have another). Each time we post a role, I underestimate just how difficult it is going to be. My first thought it always, “This will be a piece of cake. There will be at least 200 applicants within the first week. Who doesn’t want to work for Microsoft?”

And, here is the first problem: there are at least 200 applicants within the first week.

Particularly in a recession, everyone in the world thinks they can be an Administrative Assistant. And many people confuse Administrative Assistant with Receptionist. How hard can it be to answer phones and send e-mail? “I am unemployed, I am educated, I have 10 years experience as an architect (or whatever)…I should be a shoe-in.” Wrong, I say! Just like any other discipline, good administrative skills come from experience. You can’t just hand your Outlook access over to any old schmoe and expect them them to know what to do. Heck, how many people even know how to look at someone else’s calendar once access is granted?

Rather than running a key word search, we often have to actually put eyes on almost every single resume in order to determine qualificiations. After all, everyone puts Microsoft Word or Microsoft Powerpoint in their skills category. But, that doesn’t mean everyone can convert a Word document into a Powerpoint slide. Once we put eyes on these resumes, it becomes easier to narrow down the pool. If you haven’t had some kind of administrative experience, you’re gone. That’s it! Just like any other open position, I need someone with experience in the role. Not someone who graduated with a degree in Philosophy and needs to find a job while they find themselves.

But we’re still left with somewhere between 50 and 100. I can’t call all of these people! I have to keep nixing them. I start with poorly written resumes. If a person can’t present themselves well how can I trust they will successfully represent our leader? Gone!

Companies are next. Anything similar to what we do? Maybe they know some of the same people. Perhaps they have already learned certain traits and quirks of the industry.

Even after all of this, I can still expect quite a few phone screens before I’m able to narrow it down to the three of four that get to interview. At this point, I can really start getting to know the candidates.  I sorta think of myself as Yente from Fiddler on the Roof. “Matchmaker, Matchmaker, hire me an admin!” Afterall, hiring somebody’s Assistant is a lot like hiring them a spouse. They will be spending a LOT of time together. Personalities must mesh. Working styles must align. They absolutely have to like each other! We can’t end up with John and Kate, here.

The phone screens are often longer, as well. I need to dig really deep to find out what kind of person I am talking to. How will they approach the boss if the boss forgets to do something? How will they keep their leader on schedule without being annoying? Can they be a good and respectful gatekeeper to the throngs of people that want an audience with this executive? It’s not easy! There are a lot of soft skills that are often more challenging to pin-point than Mr. Purple Squirrel who can often quantify much of his experience.

Ah, Admins! I love the Admins I work with. LOVE LOVE LOVE them! They are brilliant and amazing! But, dime a dozen, they are not. Not for a good one, anyway.