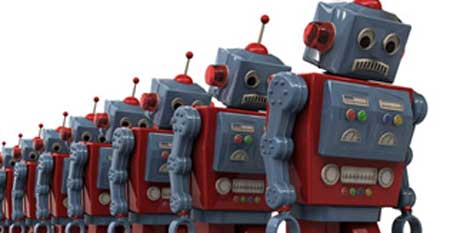 Probably the most explosive statistic HR folks have been exposed to recently is the Manpower Survey announcing that 84% of employees plan to look for a job in 2011. That’s quite a few. It’s not the only place you can find that data, and it’s not just the good ol’ USA.

In India the statistic is 40% who plan on quitting. Another survey by Monster says 66% will be looking. A Career Builder survey shows that 15% of the workforce is actively searching and another 76% would change jobs for the right opportunity.

So – if these statistics are anywhere near correct, HR has a tough, tough job ahead of it in 2011.

But let me help you a bit.

I’m beginning to think these surveys aren’t accurately reflecting the true desires of employees. I don’t think they’re lying – but I do think there is something else at play here.

And that is the principle of social proof.

As someone who makes their living influencing behavior, I’m always keeping my eyes open for these types of issues.

A Definition:  Social proof at its core is simply this: we, as humans, like to “go along.” When we don’t have a strong idea of what the “right” answer is, we look to others to see what they think. Our behaviors are influenced by what we believe the majority is doing. If we see everyone dressing like Don Johnson or Madonna – we will adapt some of those fashion elements in our own style (c’mon guys and gals – you know you did it… don’t hide… it was cool back then.)

Social proof can be one of the major behavior influencers.

Simply put – it’s what the cool kids are doing – and we want to be cool.

My thinking is that the first survey on employee intention to leave might have had some validity – but every survey after that could have less and less validity. It might just be that employees, having seen the previous survey results think… “Hey – if a lot of others are doing it, should I be looking into it as well?”

Is it any surprise that the most recent surveys report the “highest intention to leave” percentage? I’m thinking that employees aren’t really wanting to leave – but they are wanting to be like what they think OTHER employees are like. And if they’re thinking about leaving, I should too. I could be wrong – but in reality, if employees think everyone else is thinking about leaving (real or not) it will influence their behavior.

As an HR person you need to, first be aware of the effect of social proof and second, you need to be prepared to counteract its affects.

To help me help you, I’ve enlisted Brian Ahearn – one of only 25 certified Cialdini Trainers (IN THE WORLD) to discuss ways HR can help mitigate the effects of social proof (if in fact it is playing into these statistics.) Brian – in addition to being an all-around great guy, also blogs at Influence PEOPLE – read, know it, subscribe to it.

Below is a modified exchange between Brian and myself about these sobering statistics on retention.

Me: First off Brian – Do you think that the principle of influence called social proof is having any impact on the data that is being promoted on the web?

Brian: Absolutely. The principle of social proof is hard-wired into our brains.  Just seeing statistics like this will influence an employee’s behavior. Even if they never had thought of leaving a company – seeing that a majority of “other employees” are considering leaving will impact their feelings.  And that would have to show up in subsequent surveys. The first one wouldn’t have much social proof – but if the survey population saw the results from the first survey, it would be almost impossible for it not to influence the outcome of every other survey.

Me: Okay – if we assume some portion of the results from these surveys is due to the effect of social proof – how can an HR person help reduce the impact of that effect within their organization? Are there any communication and management techniques that can soften the effect?


Brian: First of all I’d be very careful putting out any of the statistics to your own employee base. It is very possible that they have not seen the statistics. Sending out an email saying something like, “I know you’ve all seen that 80% of employees are looking for work but not here,” – will just reinforce the problem you are trying to avoid.

Now, if you think your well is already poisoned I’d:

Me:  Thank you Brian…

There you go folks –from a certified influence trainer. (BTW – that’s the authority principle in play.)

If you’re worried about your own employee turnover/retention in light of these statistics, I suggest you take Brian’s advice: get ahead of the curve by highlighting your own positive statistics – and if you have to – address the issue head on and sow the seeds of doubt.

And finally, show your employees how these types of stories play on human psychology.

Don’t take my word for it – all the cool HR folks are doing it.