I seem to be experiencing an onslaught of shady business practices from recruiting vendors of late. Maybe there’s a sign on my back that says “Kick me!” that I just don’t know about, or maybe some businesses are feeling desperate… but I thought I’d share a recent one for you to weigh in on.

I am lucky enough in that some of my company’s talent will share with me and other members of our HR team when they are being approached for job opportunities elsewhere. Sometimes it is direct competitors, sometimes not, and sometimes, it is recruiting agencies and headhunters who are 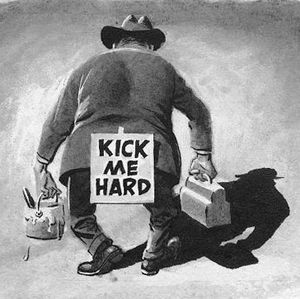 recruiting on behalf of others. Now, I do take it as a compliment when poaching attempts happen with our people. We have attracted really stellar talent who we also work hard to further develop and grow. They are indeed great catches and we know it very well. And we also know that it is simply a reality that great talent will experience attempts at being recruited elsewhere. But, fear not. We also work hard to create and maintain an environment that retains its talent – so much so where I have had a competing company’s recruiter say to me,  “Whenever we try to recruit your people, they all seem so happy and never want to consider our opportunities!” If ever there were a backhanded compliment… but I digress.

Here’s where things begin to get shady… so, we have stellar talent. Yes. There are many a poaching attempts. Yes. But how am I to respond and react to a headhunter/recruiting agency who I know has tried to recruit our company’s talent away who then reaches out to me to try to solicit our business?

Isn’t there something wrong with that picture?

My gut reaction? “Oh… You want to try to source from my firm and recruit away our talent, then the very next day you want to solicit business from us? Well, that just ain’t right in my book. No, we don’t have any staffing needs you can help us out with and no, don’t bother to follow up with me either.” And that would be the polite version of what I would say to said offender. I actually just ignored the latest outreach attempt to solicit our business, because I am so baffled by their practices.

So what’s a gal to do instead? A recruiting friend in my industry who works for a competitor recommended I just engage them in a search or two and then write into the contract that they can’t recruit our staff for their other clients… which is logical enough. It is what she does with this very same firm. But truly… I’m a little too bitter to consider that and cave in – and as many people know, search firms are my very, very, very last option. We probably only had one or two hires last year who came from a recruiting agency and usually, it’s that we had a temp need and ended up keeping the person on board full-time. And that makes me happy from a budget perspective. But even if I were desperate, I could never reward this particular agency with a search or two. No way, no how.

But do I just continue to ignore them instead? Or should they be called out?

Maybe they really think that I don’t know about their poaching attempts. Or maybe this happens more often than I am aware and I have been naive all along about search firm ettiquette, or lack thereof. I’d hate to think it is that bad out there though and that this simply is all fair game. Either way, hit up the comments with your advice and insight. I’d be curious to know if this happens more than I realize, if this is commonly held as acceptable… or if someone really put a “Kick me!” sign on my back, and it’s just my month to be toyed with.