Articles about the Super Bowl have filled the blogosphere over the last week or so. And while evaluating Fergie’s screeching performance is certainly entertaining, let’s instead evaluate Dallas Cowboys owner and Superbowl host, Jerry Jones’ performance after some high profile missteps. It’s a great teaching case for senior leaders.

Jones was the leader of the host activities for Super Bowl week, and in multiple interviews, he talked about the fact that his $1.15B stadium would be perfectly ready to host a wonderful Super Bowl. If that weren’t enough for ya, Jones was also personally committed to making changes to the stadium in order to break the all-time Super Bowl attendance record. So he had some goals. Stretch goals, let’s call them.

And if you saw the game, you know that he failed miserably. When temporary seats did not get constructed in time, 400 fans were left shut out and seatless while another 850 were put in “alternate seating,” which apparently meant sitting inside a stadium bar watching the game on televisions. Lawsuits on the seating issue were filed by the Wednesday after the Super Bowl, but stadium issues were widespread beyond seating itself:

The NFL closed four of the 10 entrance points into the stadium Sunday because of lingering ice on the roof of the stadium. On Friday, six people were injured by ice falling onto the sidewalk outside of the structure. In addition, the Arlington Police Department requested additional officers to the East Plaza ticket offices after the crowd started to become unruly after ticket scanners weren’t functioning. There were chants of “Jerry Sucks!” and “NFL Sucks!”

Even casual fans know that Jones is a well-known micromanager. The money quote from USA Today: “When he arrived in 1989… (Jones) insisted he would be involved in every aspect of the operation, “from the socks to the jocks.” 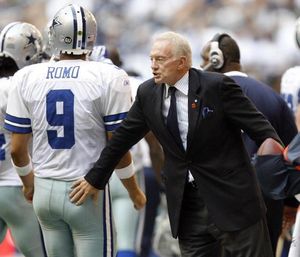 So, how would the performance management conversation go with JJ?

Jones was the leader, and his personal goal of breaking the attendance record drove the plan to add more temporary seats, a decision which ultimately led NFL executive vice president Eric Grubman to describe the stadium issues as “awful” and a “total disaster.”

In addition, the Fort Worth Star Telegram chased the paper trail and quotes a warning letter from Arlington Fire Chief Don Crowson to the GM of the stadium:

I’m also concerned about the effective completion of this project. There have been multiple meetings with your contractor where agreed upon goals and timelines were established and, subsequently, not met nor completed to standard.

That, folks, is a pretty clear statement – nicely documented which all you HR pros gotta love – regarding performance.

Bottom line is that Jones got a hard lesson in managing through others, but I think the episode serves as a solid case study.  After bragging for years about a detail-oriented (micro) leadership style, Jones and his team dropped the ball on multiple fronts. The fire chief nailed the performance evaluation for Jones and his team, and most other leaders would get the boot for a failure of this magnitude. I guess that is one more good thing about being a billionaire though—you typically don’t get fired, even for colossal mistakes. But fear not – this blogger will still call you out. Billionaire or not.