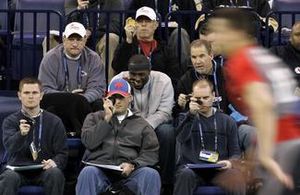 So you have to pull the trigger on the big hire. The kind of C-level, (or close), critical, visible, and organization-shaping call that can make or break your career as a talent pro at the firm, and may, if you swing and miss, cause a few others to go down with you. This is the big show, and the slate of potential candidates is impressive and deep. On paper, they all have the necessary tools, great experience with a track record of success. Similar and superior education and training, and the all have been coached to have the ‘right’ answers to your interview questions. Seemingly, no matter which candidate you choose, you can’t go wrong. But you get paid the big bucks to choose the best, not just narrow the field to three or four. And something tells you that the difference between the best choice and the worst is potentially huge. Believe me, in a couple of years, everyone will know if you made the right call.In true FOT fashion, this kind of selection conundrum reminds me of the situations that face talent selection executives at professional sports teams. How do teams make the distinction on draft day among competing prospects? Prospects that often have remarkably similar bodies of work to assess, whose physical traits are consistent with past successful players, and who come prepared and ready for your interviews, coached and advised well by a retinue of agents and business managers.

Recently, a friend of FOT shared with me this story about the high-stakes selection process at one NFL team, (some small details modified to protect the identity of the involved parties).

A few years ago, I sat next to the head of player personnel for an NFL team on a plane from New York to Dallas, just about a week before the NFL draft.We struck up a conversation about how he makes his picks. (He had been in charge of player personnel for the team for over 10 years, a stretch of time where the team had enjoyed considerably more success than most others). Prior to taking the job in the NFL, he had been a major college head coach at two different and winning programs. Simply put, he knew football. We got to talking about how he makes hiring decisions, i.e. what players to draft and to try and acquire in free agency. It was a great conversation – one that I will long remember.

He mentioned that each year he gets to decide which 20 year old his owner writes a $20M check to, and the owners get very pissed if he gets it wrong, and they don’t suit up on game day in the NFL, and become high-performing contributors to the team. With those kind of stakes, getting these high draft picks right often makes the difference between a consistent winner and a team that struggles.

He told me what he does to better assess these young players who all have the physical tools to succeed. To get more insight into the mental makeup and character of the prospects, he focused on the following:

I also asked him what pick he was personally proud of, and he told me about his first draft with his current team, and he went on and on about [player name redacted], a quarterback, and how he felt I should keep my eye on him, and that his character was rock solid. As it turned out, the player in question has had an uneven career, with on-field performance a disappointment, and eventually was released from the team, to be picked up by another team in a back-up role.What is instructive about this story to me is that talent selection is talent selection – whether it is for the most junior role in your office, or for a NFL first-round draft pick set to become an instant millionaire. Character and personality are important no matter the role, and digging deeper to get a truer sense of these character and personality traits can mean the difference in identifying that all star among a similar looking and seeming slate of candidates.

But even after all this, after these assessments, and examinations, and tracking down every cashier a candidate ever bought a Slurpee from to see if he was a nice guy, sometimes, maybe too often, we make the wrong call. It isn’t always our fault of course. Even ‘can’t miss’ candidates sometimes do indeed, miss.