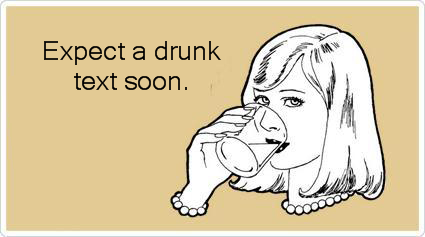 A sexual innuendo, some social media and a smart phone walk into a bar one night… Sexual Harassment 2.0 comes out the next morning.  A cautionary tale…

I was at a conference in the fall and was having dinner with a colleague and she noted the time (9:00
pm) and said… “Well, this is when all the drunken texts will start to roll in.” I thought she was full of crap and I told her so. But then she handed me her iPhone. And BAM! A new text every five minutes would roll in… “Whatcha wearing?” “Need some company tonight?” “You are so hot and funny…” and my personal favorite… “You’re a D-cup, right?” And I’m not doing the seedy texts justice. Note: three of them were from married guys… two of them I know personally. I was floored. I had no idea this sh!t happened. Evidently, not being a part of the beautiful club has its privileges… I’ve never received a drunken text. No one has tried to sext with me. Quite frankly, I’m not sure how I would react. I’m still amazed at how graceful she took the unwanted attention. At that point, I didn’t think about whether or not this “action” was conducted on a company’s phone… but eesh. Think about that mess.

In February I was hanging out with a dear friend of mine in Dallas. She’s extremely active online and has been for years. We got in to a heated debate about Twitter and her associated profile (bio & pic). She bet me that she could garner 200 followers while we were at dinner… if she made some slight modifications to her profile. By slight changes, I mean – a bio that was flirtatious (not raunchy) and a pic that was equally flirtatious… take that for whatever that means… (shhh your inner deviant). So, after her changes, we went on with the dinner. Lovely conversation… and she garnered almost 500 new followers while we talked politics and religion. That many people “judged” her during that time period and decided to follow her. Really? Are we that shallow? Really?

Last week, I was in Austin for the SXSW Interactive Conference. A friend of mine called me out for “liking” a comment on one of her Facebook photos. I had no idea what the hell she was taking about… so, she pulled out her iPad and pulled up her photos and someone had made a (kind of) flirtatious comment about a photo of her at the beach and sure enough… I had “liked” said comment. In my defense, I thought I was “liking” the album… which was cool but alas I looked like a total douche. Then she went on to show me about 200 other douche-like comments on her photos. Not cool. Not cool at all actually… and I was especially hurt because I was lumped in with all the other jerkoffs.

Are you asking the obvious question right now?  Who the hell does this guy hang out with? No, not that question… the question you should be asking is… does this routinely happen to people I care about and/or my employees? If you say NO… then do me a favor and test that theory.

I believe this happens more than we care to admit. Unwanted and/or unsolicited sexual messages happen every single day… it happens in your place of work… it happens with your employees… AND on the company’s dime. And, you own it… kind of. IMO, you can only play stupid for so long. I’m just now getting over stupid, so I know. So before you get busted because one of your lame-ass employees harasses another one of your employees… get your 2.0 house in order.

Here are some things to look at…

Lastly, Google – “Sexual harassment 2.0” – you’ll find some nice online tips for this important discussion. Anyone can make a mistake. One drink too many at a conference… But that’s why we need to talk about it. We need dialogue about this topic and we need to establish expectations and/or social norms via these mediums. Nothing funny about sexual predators and, IMO, social mediums make it “almost” okay to do things people would never think of doing in person. Trust me, six months ago… I would have laughed at this article much less penned it. Not anymore. I’ve seen this behavior with my own eyes. Not cool. Decidedly not cool.