I’ll never forget the time my husband was bitching about some new HR policy at his work. It’s just another waste of time and HR is stupid and blah, blah, blah. And then the conversation went something like this: 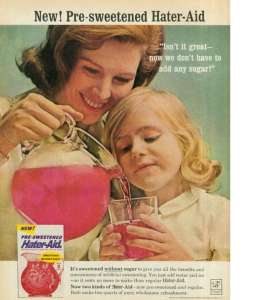 “Well, at my company, people do not feel the same way. At my company, I am well liked. People smile when I walk in a room. They hold the door for me. They show me photos of their babies and wives. They think I am the Jesus of health insurance. And our performance review system? Second to none!” Go me!

“Meredith, let me be clear. No one likes their HR person. Not even you. You may have been popular in college, but not anymore. To them, you are the person they need to suck up to in order to keep their jobs. No. One. Likes. HR.”

Clearly my husband is an asshole, right? I mean, HOW COULD THIS HAPPEN?! How did I choose a career that people hate? I am freaking popular in real life. So I went outside of the car dealership (where I practice HR – yes, believe that) and interviewed some of my non-HR friends. I asked them all why people are drinking the HR Hatorade. And here’s what I found:

The list could go on. And on. But maybe, just maybe if we all join together and refuse to act like a collective group of idiots, we could cut back on some of these gripes and become the department that employees drink beer with after work. Of course, we would never allow that because we are HR, and it probably violates some policy we wrote about fraternizing… but, hey, it’s the thought that counts.