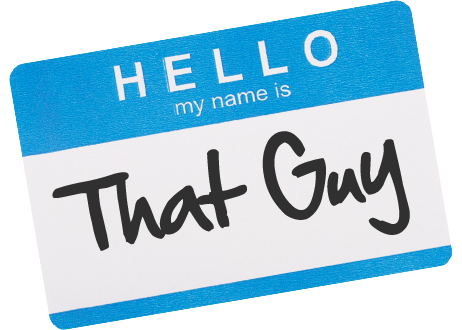 Jim Rome is a very funny sports commentator with both a national daily radio show (The Jim Rome Show), and ESPN TV Show (Rome Is Burning) – who does has a classic bit where he describes “Softball” Guy (see below). “Softball” Guy is that ultra weekend warrior who spends $500 on a bat (and has 3 or 4), all decked out in head-to-toe Under Armour, drinks the Gatorade G Series to be at peak performance level, will take out his best friend at home plate in a game that has no meaning, and pretty much is over the top in every way possible for someone doing a sport he’s not getting paid for!

I was at a conference the other week and “Softball” Guy, got me thinking about “Conference” Guy (or should I say Gal – doesn’t matter, not much difference!). As I was sitting watching a presentation on HR, from a very dynamic speaker, a current trench HR Pro – “Conference” Guy decides to cut in – and out of nowhere comes a question that has absolutely nothing to do with the topic currently being discussed. It would be like you and I discussing how the new political administration is going to impact the HR function as a whole within the next 3 years, and “Conference” Guy raises his hand to ask: “So, do you think Obama is better than Bush?” You just stand there, somewhat in shock, trying to determine is this a joke, or is this poor sap really that disconnected with reality, that he just asked that.

“Conference” Guy, though, can’t just stop with one misguided question, he has to continue high-jacking your presentation until you’re almost out of time, too many slides left to even fake your way to the end, and no time left for any legitimate question and answer. For some crazy reason you can never really figure out why “Conference” Guy is even at the conference – doesn’t usually work in HR, or as an HR vendor, might not even work in another functional area, where you could connect the dots back, heck most of the time they aren’t even working! I’m always perplexed at how “Conference” Guy can even afford to attend these shows (maybe there is a Sugar-Momma back home paying the bills – but once you’ve seen “Conference” Guy, you have a hard time even finding that plausible).

“Conference” Guy sure doesn’t seem shy or conflict avoidant, doesn’t seem to follow social norms of any kind, and definitely believes it’s important that you get to know him – and that you exchange business cards.

And there is a new evolution of “Conference” Guy – called Social Media “Conference” Guy (SMCG). You know the SMCG – meets you after a session while you’re in line for the stale bagel and warm orange juice, and before you make it back to your laptop, you have a LinkedIn request, Facebook Friend Request and a Twitter Follow (see you just thought of at least 3 individuals who are SMCG’s!). SMCG’s can be tricky because if you don’t “play nice” with them and act like their crazy ideas or warmed up HR advice from 1996 is great – they can turn on you – so be careful!

“Conference” Guys/Gals are different than “Conference” Fans though – Conference Fans are the types who truly just want to meet you because they like your stuff, maybe share a drink or something.  “Conference” Guys/Gals aren’t fans, necessarily, they are really more fans of themselves, but don’t have the meat and potatoes to get in the game themselves – so try and ride the coattails of each session speaker – and truly feel like they somehow made each session better by their insight (or lack thereof).

So, what can we do about “Conference” Guy?  Here’s my suggestion – at your next conference tag them with a special emblem – you know like the Captains of a Hockey team get the “C” on their jersey. We can put a big “CG” badge on their chest and tell them they’ve been “selected” (they love the special treatment) to “observe” and give feedback to the conference leaders at the end of the conference.  Rules for being a “CG”: you can’t talk or ask questions during sessions and no interaction with session speakers (you know those speakers might try and suck up to you for good evals!).