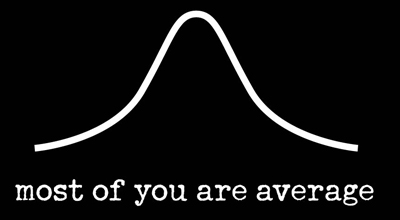 Over the past couple of months since I proposed saying Bye-Bye Performance Ratings and Pay for Performance as you can imagine I’ve been getting all sorts of opinions on the topic.  These opinions run the gamut from “this is the best idea ever” to “this is a stupid idea and everyone’s going to quit.”  Far and away the most common comment I get is that I have to make sure that our top performers are rewarded for their contributions so they aren’t demotivated by being treated the same as an “average” performer.  Well of course, isn’t that what we’re supposed to do as HR Pros?

Ah, but it’s not so simple. Why? Well according to a really cool book I just finished, Why We Make Mistakes it’s becauase pretty much all of us wildly overestimate our capabilities and view ourselves as above average. This includes everything from how attractive we perceive ourselves to be, how good we are at multi-tasking to how good we are at our jobs. In fact, our overconfidence in our abilities actually goes up as the work gets harder! So, I ask you my above average reader, how the ‘eff do can you have a pay for peformance system in which ALL of the participants see themselves as above avergage??

The answer is you can’t. Oh you can try and put all sorts of fancy reward systems in place with metrics, train people on how to use these metrics and convince yourself you’ve done it. But you haven’t at least not with a pay system because inevitably someone somewhere thinks they got the shaft. Why? Because it’s pretty likely no one gave that person good feedback. Yes, we’re back on feeback again.

Turns out there is a potential cure for overconfidence syndrome and maybe pay for performance systems as well- quick, corrective feedback. Back to the Mistakes book and one of my favorite quotes – “in situations where overconfidence is high, feedback is often low, either in quantitiy or in quality or in both.” At my company we’re hoping to accomplish this by replacing semi-annual reviews with monthly feedback sessions – quick, corrective feedback sessions.

Now back to the high peformer problem. We’ve established that while most of us think we’re top dogs we’re probably closer to avergage. But there are people in all of our companies who do outpeform their peers and we do have to reward and recognize them. This is actually pretty easy – every manager can tell you the one person on their team they couldn’t live without – the real star. There. Done. Reward them significantly and move on. For the rest of us that make up 95% of the organization that doesn’t mean we get ignored. What it means is pay me fairly, competively, and prove to me it’s competitive.

Or you can always hire the Tiger Mom to whip your ass into top performer shape!!