For those who might not know – I was once a proud member of the Applebee’s corporate HR team, and actually had regional coverage over the Michigan market, where this past weekend a toddler was served alcohol by accident (see the local story here) and had to be taken to the hospital. Long story-short, Meredith Soleau has a take on it, – family comes to Applebee’s for dinner, Mom orders her child some apple juice, Bartender gets the order to fill the apple juice, grabs bottle marked “apple juice” (which actually had a premix of an alcohol drink) that another bartender during the day had made up, and put in the mixing bottle marked “apple juice” not thinking anyone would ever mistake it (or at the very least “I” know it’s not apple juice, so I won’t mistake it) – and bang – a disaster waiting to happen. 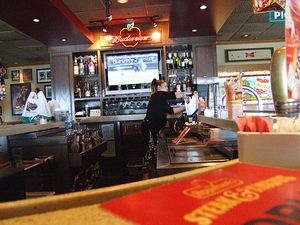 First let me state a few things I know:

1. Applebee’s corporate does a phenomenal job training their staff and management on serve-safe alcohol.

2. In my 3+ years, with 70 restaurants and multiple sting operations by local and state police at every location, every year – we were stung once in all of that time (for those that don’t know what a “sting” is: police use underage people to go into restaurants and have them order alcohol to see if the establishment will serve them – and by underage it’s usually 20 year olds who look 35). All involved in the failed sting operation were fired – server, bartender, manager on duty and General Manager who wasn’t even on duty at the time (now that’s zero tolerance!).

3. Training doesn’t happen once at Applebee’s when you’re hired, it happens multiple times throughout the year and many levels – this wasn’t a training issue or a HR issue.

So – why did this happen?

Like most major problems, there are a number of issues that happen all at the same time to cause disaster. Here’s what I think happened with an issue like this:

In HR we try and help mitigate risk for our operations partners, who in turn work their butts off to try and make our organizations profitable – this is what happens when those two things don’t align properly. Applebee’s corporate has some of the most talented HR Pros that you’ll find in any industry (and I don’t say that lightly – they have truly impressive people) and they’ll weather this storm and make it better – because that’s what good HR pros do.