Oh, Applebee’s, you are having such a bad week. It is time for some quick PR moves and a swift reaction to the baby who you were slipping drinks to last Friday night.

In case you were living under a rock this past weekend, a 15 month-old toddler was intoxicated after an Applebee’s server gave him a margarita instead of apple juice. The juice came with his kid’s meal. 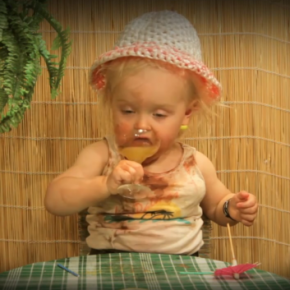 The baby’s mother noticed something was wrong after her child was greeting the walls, put his head down on the table, and seemed very “happy”. When she tasted his apple juice, she realized that he had been served a margarita. His mother drove him to the hospital (no drinking and driving, baby!) and found out his blood-alcohol level was .10. Doctors say that if he had drunk (I said drunk… so witty) the entire cup, he could have died.

I have to ask myself, if I were the VP of HR for Applebee’s, and I knew that I had to do a full-on investigation, and all eyes were on my company – where would I begin? Whose head would roll first? The bartender? The manager? The waitress? Obviously, the public expects something to happen.

Having worked behind a bar in college, I can see how this happened. It’s always dark behind the bar. Jugs of juice are typically kept in the same cooler as the pre-mixed jugs of alcoholic beverages. I am sure that the poor waitress was probably in a hurry, grabbed the jug, filled the cup, and never thought better of it. So do you fire her? Or do you fire the bartender who didn’t label the jugs properly to make sure this didn’t happen?

What about the manager? It is his store, and all he did was apologize to the mother, telling her he didn’t know what else to do. Um? It may just be me, but he kind of set you up for a giant law suit by doing, oh I don’t know, NOTHING! If I were him, I would have started with paying for their meal. I also would have told these people that I would reach them first thing in the morning to talk about how to make this right. In this situation, I’ll bet Applebee’s wishes they were able to throw some hush money at this family before they talked to every news station in Detroit.

Applebee’s has issued a statement saying that they will now serve juice at the table in single serve portions (like a juice box). But is that enough? Because really, if this were my daughter (who is about that age), I would be suing the pants off of Applebee’s. And I wouldn’t even feel bad about it.

I would be interested in what our friend, Tim Sackett, has to say about this…