I’ve heard lots of talk recently about McDonalds announcing that they’re looking to hire 50,000 new employees on April 19th… and not all positive chatter. 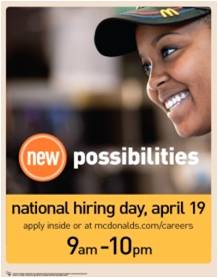 Sure, I understand how and why it’s easy to poke holes at this. Because your first thought? You roll your eyes and call it a PR stunt that attempts to repair the negative image of the McJob. It’s where a lot of people’s minds went when the news broke. And then you’ve got those who think that the notion of adding 50,000 McJobs is hardly helping the economy when you consider living wages. Fine. But I’m always going to be of the mindset that a job is better than no job. And the kind of upward mobility that McDonald’s provides is hard to deny. So my initial reaction was first to be happy for them – I’m a proud McDonald’s alum and will always be champion of the McJob. But I did move pretty quickly from pride to simply cringing at the administrative nightmare that hiring 50,000 people in one day would entail. Yuck, right?

So we’re all a bit jaded and cynical about it.

Here’s a thought for the McCritic in each of us though – maybe it is indeed a PR stunt… but what’s so wrong with that?

I did a quick search in Google news using the keywords “McDonalds and 50,000”. 942 news stories surfaced – coverage in everything from Forbes and NPR to the Wall Street Journal and Christian Science Monitor. And to me, that’s pretty astounding. I mean wouldn’t you be more than happy to get 942 stories written in cream of the crop news outlets about your own company’s hiring plans?

We’re not all McDonalds though. And we’re probably not all in the position to announce plans to hire 50,000 people this year, let alone on a single day. But what if there were some other news worthy pieces of information about your company’s hiring plans this year? Or what if you were doing something truly different or remarkable within your company from an employee programs perspective? Or maybe it’s how you recruit. Maybe there’s something notable about how you are attracting talent.

I don’t often hear about partnerships between recruiting and corporate marketing or communications teams. If I do, it’s about employee or internal communications, or ad buys, or recently, on the social media front. And I don’t know how often I see a recruiting or HR team trying to proactively pursue positive media for themselves. Myself included. Most all of the coverage I have received has honestly fallen in my lap. But imagine what an amazing recruiting/attraction tactic it would be to have everyday Joe learning about your company and job openings by reading it in a mainstream news outlet? A local newspaper? Or what about your company’s trade pubs or industry mags?

942 news stories about any company’s hiring plans isn’t so shabby… even if some of the back chatter is cynical because at least we’re talking about it. Time for us to all go back and brush up on our PR 101, or at least pick up the phone and reach out to your corporate communications folks.