You’re hunting down the perfect hire.  You’ve outlined the specs for the job.  You’ve combed through all the job boards and check the passive (aggressive) candidates on LinkedIn.  You’ve identified two strong candidates and you bring them in for the interview.  They both do well. You stack up their resumes and they both look pretty similar on paper.  They’re both aggressive.  Know how to close.  Similar education.  Similar history of success.  One does seem to have a few more years under their belt.  A bit more seasoned and wily.

They’ve got swagger as my kid would say.  (For those without 17 year olds in the house, swagger is something you can’t define but you know it when you see it.  It’s kinda like being cool but with more of a 2011 spin.)

Which one do you hire?

Before you reach for the person with “swagger” consider this…

Bull sharks and white sharks are both apex predators.  Ain’t much they won’t attack and eat.  Both are aggressive.  Both grow to about the same size (some whites can be bigger – but overall about the same.)  Both have big, big teeth.  Both are pretty solitary hunters.  Both strike fear in the heart of their prey (meaning me). 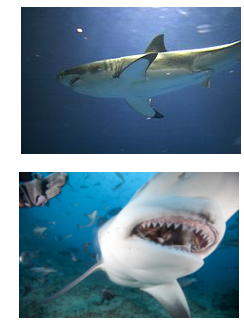 But there is a little known difference between the two (little known to the random sample of bar patrons last Saturday). Bull sharks tolerate (rather well) fresh water.  Yep.  Fresh water.  In fact, after Hurricane Katrina, many bull sharks were sighted in Lake Ponchartrain.  Bull sharks have occasionally gone up the Mississippi River as far upstream as Alton, Illinois.  They have also been found in the Potomac River in Maryland.

Why is that an important fact?  The water these sharks live in – and can thrive in – is like your corporate culture.

I’ve heard people say culture doesn’t matter.  But that’s like saying the water doesn’t matter to these sharks.  The bull shark can thrive in fresh water and salt water.  The “great” white – not so much on the fresh water side.  You won’t find many great whites in Alton, Illiniois.

On paper, the two sharks are similar if not almost identical. They have similar characteristics and I’d even argue that most HR folks couldn’t tell them apart from the pictures provided in this post (the bull shark is on the bottom BTW).

Culture is the Water Employees Live In

Your culture is the water your employees thrive (or die) in.  Just like the sharks, culture surrounds employees; they live in it, breathe it and when toxic – like fresh water to great whites – can die in it.

Check your two candidates again.  Which one now looks better?  One with a history of success in similar cultures as yours – or even success in many different cultures?  Or the one who has a bit more swagger – but only in a specific culture?  I’d go with the bull shark.

And you thought you were safe in Lake Erie this summer…look at that bottom picture – in fresh water! Ha!