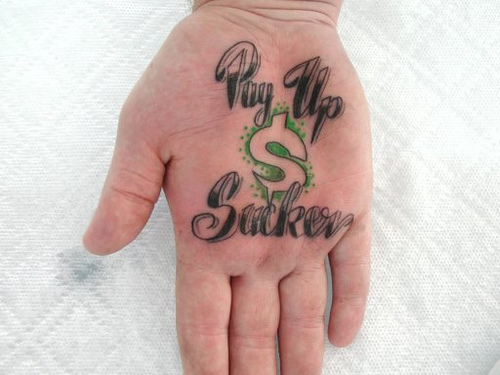 Who pays for a bad hire?

The natural and slightly knee-jerk reaction to this scenario is that the organization mostly pays. The company feels the pain of the wasted time, effort, and cash associated with advertising, promoting, screening, assessing, interviewing, deliberating, offering, negotiating, closing, welcoming, onboarding, training, coaching, correcting, coaching some more, warning, warning again, deliberating, and finally separating from the ‘bad hire’. But these are ‘soft’ costs to some extent.
Once the Monster.com invoice is paid, most of the rest of the affair is ‘just’ internal time.

But it is a ton of effort. It takes time. It costs real money. And when that new hire, particularly one who is hired in a position of authority, or one who is highly visible in the organization or in the marketplace doesn’t work out, well, it looks bad. It can look really bad.

Recently in an article in the New York Times, Jonathan Kaplan, founder and chief executive of Pure Digital, the company that made the wildly successful Flip camcorders, the company that Cisco bought two years ago for $590 million, (and later killed, but that is a story for another day), talked about how he dealt with the ‘bad hire’ –

“If you hire someone bad, fire them immediately and give them a big severance package so they feel good about you. We gave our workers four to six months’ severance, even if they’d worked only four months. You might think that’s crazy. But it was our mistake to hire that person. And it’s not that much money, really.”

Is that crazy? Does it make any sense to ‘pay off’ short tenured employees who did not work out in order to cement a reputation as a good employer to work for? Are there other compelling reasons to offer such a generous package to failed hires?

It is a tough question for sure.

The thing is that relationships of all kinds fail, and they fail for a myriad of possible reasons. Basketball stars leave the hometown teams they have grown up with, seemingly bullet-proof marriages fail, even iconic brands once in a while change their look, feel, or formula in an attempt to make a fresh start, only to see legions of previously loyal customers flee.

So why do new hires fail?

What are the most common reasons why the lengthy, detailed, immersive, introspective, and sophisticated courtship process between candidate (and eventual employee) and company fail to accurately provide proper and adequate warning to one side or another that the imminent and seemingly perfect match they are about to make will, in short order, go awry as fast as a remorseful Las Vegas bride can Google, ‘Are drive-though weddings officiated by someone in an Elvis costume actually legal?’ And beyond that, which entity, (recruiter, hiring manager, new employee), should bear the bulk of the responsibility and perhaps the penalty, for these ‘bad hires?’. And finally, should ‘failed’ new hires be rewarded, as Kaplan describes, with generous severance agreements?

As my esteemed FOT colleague R.J. Morris pointed out in one of the famous (or infamous) FOT crew email chains, new hires go wrong for (essentially), three different reasons:

1. There is a basic and fundamental misalignment between the employee and the role.

In other words, the person hired, based on their experience, education, or demeanor had no realistic chance for success. Did the employee embellish their credentials or fail to mention factors or circumstances that would have caused the recruiter or hiring manager to pause? Possibly. Or even probably. But when people are in need of a job, when the specter of mortgages and tuitions and car payments factor in, well, who would not embellish a little? So, eventually the new hire fails, and the organization has to sort out what went wrong.

2. The new hire seems to be a fit, starts strong, full of enthusiasm and fire, but soon after starts to fade, and their level of effort and commitment trails off.

Soon, they seem to disappear into the background, and the initial excitement and expectations for success that were espoused by both the company and the employee become tempered or even forgotten. Sure, the new employee is doing ok, but the company was not hiring for ‘ok’, it was looking for something much, much more impactful.

3. The new hire joins the company and almost immediately fails to deliver on the most basic expectations.

They are late, disinterested, seriously and perhaps dangerously incompetent, have interpersonal issues with the staff, and otherwise screw up the new gig they managed to talk themselves into. This is the archetypal ‘bad hire’ we hear about so often.

So let’s assume R.J. is right, and the above three reasons, (or close approximations of the same), constitute the vast majority of so-called ‘bad hires’. In these scenarios, would the Jonathan Kaplan ‘big severance package’ strategy make sense for organizations, or at least hold up as the right thing to do?

Scenario 1 – A complete whiff on the hire. Someone, either the recruiter or the hiring manager totally missed on this, and brought in someone clearly not suited for the job. Who is at fault on this one? The new hire? I think not, as even if they fudged or embellished a little about their skills or experience, what can you expect? They wanted the job. They probably needed the job. If you hire them and they have no shot at being successful, then that is your fault. Pay the severance.

Scenario 2 – A strong start, then the new hire fades and disappears. What is the most likely reason for this scenario? Probably lack of attention, effort, and engagement from the manager, team leaders, or project leaders who can’t seem to find time or a method to engage the new hire in their existing work processes. Sort of a ‘Hi, welcome to the team, sit over there and read these manuals’ kind of approach to integrating the new employee into the flow. Maybe the new hire tries to get some attention, get involved, and get noticed, but eventually they give up. The company really did not need or want to bring them in in the first place. They have mostly wasted everyone’s time. Pay the severance.

Scenario 3 – The new hire is a complete train wreck. Shows up late, if at all, can’t perform the basic and required job functions, and essentially is a total mess. Most companies do smartly cut their losses quickly and move on. Sure, there is probably some responsibility on the part of the recruiter and hiring manager for the mess, and ultimately the situation is such a disaster, that the company can usually just walk away. Don’t pay the severance. But have a LONG talk with whoever signed off on the hire.

What is the bottom line?

To me, bad hires are mostly a function of inadequate screening, interviewing, onboarding, coaching, managing, or mentoring. These are all (or at least mostly), the responsibility and duty of the hiring organization. Most people don’t take new jobs planning to fail. When new hires fail, and the failure can be ascribed to one of these common scenarios, then yes, a generous, even overly generous severance package might be one way to inject some humanity into the process and also serve as a message to recruiters and hiring managers (whose budgets should be dinged by these severance package payments), that making the right hire is the most important job they have.

Go ahead and let me have it in the comments…