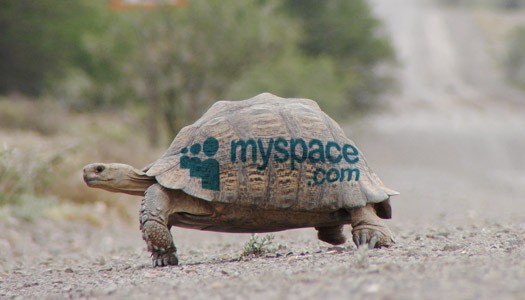 I know – your company totally rocks.

Great line of business (this should have been first on the list, but hey – we’re recruiters).  Check.

Technology that’s scalable (this should have come before the branding as well).  uhhh….

You realize that if you don’t constantly tweak and reinvent the business, it’s going to go stale – right?  What’s that?  You think things are fine the way they are?  Then you’re a statistic and you don’t even know it.

Think about your company and/or employment brand in comparison to social networks.  At this point, most people think the game is done – Facebook, Twitter and LinkedIn will rule the next decade, the thinking goes.  What else could possibly happen?

Problem is, one or possibly two of those social networks won’t really matter in 3 years.  Kind of like your company – or one of your competitors.

We forgot about MySpace.  You remember MySpace, right?

More on the fall of MySpace from a great must-read article in BusinessWeek:

“Part of the reason Myspace struggled to keep up with emerging technology companies was its site architecture. DeWolfe says that when he and Anderson conceived of Myspace, speed to market was essential. Friendster knockoffs were popping up everywhere. Myspace’s founders decided to build the site using ColdFusion, a simplistic programming language. “ColdFusion, even back then, in the engineering world, was thought to be a sort of Mickey Mouse type of technology,” says DeWolfe. “But it was so easy to use that we could just crank it out quickly. We blew out Friendster. We blew out Tribe.net. We blew out everyone.”

They also created what DeWolfe calls “technology debt.” By 2005 the site had outgrown ColdFusion. At that point it was too late to switch over to the open-source-code software favored by developers; changing would have delayed the site for a year or two just as it was exploding in popularity. The easiest move, says DeWolfe, was to switch to .NET, a software framework created by Microsoft.

“Using .NET is like Fred Flintstone building a database,” says David Siminoff, whose company owns the dating website JDate, which struggled with a similar platform issue. “The flexibility is minimal. It is hated by the developer community.”

I’m fascinated by this for a couple of reasons.  First, I’ve worked for a company that had legacy technology that prevented them from really capturing the promise of the on-demand movement with their customers, which caused them to be outflanked strategically.  The morality tale goes something like this:  You come to the budget meeting where the development schedule for the next year is discussed, and the inevitable conversation centers around the possible “big switch” to a new technology platform that’s going to allow you to be nimble as a company.  Problem is, the rewrite won’t be done for 2 years and it’s going to cost you 65% of your capital budget for development of technology.  That means if you do it, you won’t be able to develop new features or do any new releases of note for your current customers, or add bells/whistles that help attract new customers.

So you do nothing.  It’s called the dead man deferral.  You keep doing things the way you’re currently doing them and hope that one of those new whippersnappers in the market doesn’t start taking your customers.

But they always do.  You deferred, just like MySpace.  What did you expect?

It’s a parable for tolerance of change.  To be sure, there were a lot of other reasons MySpace tanked as well – technology was just one of the reasons.

But the lesson is the same whether the topic is your company’s technology stack, its approach to the recruitment brand, development of associates, or any other topic of importance you want to cover.

The dead man deferral means you say no to change.

And that practically guarantees you’ll be looking for a new job at some point in the future.