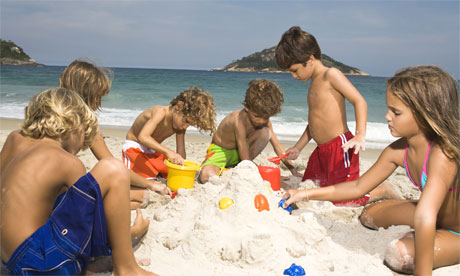 Hey HR – want to get more innovation out of your employees?  Want to amp up the creativity index in your staff.  Look no further than a 7-year old.

I’ve been a part of many brainstorming sessions.  Some good.  Some bad.  I always like how they start with “There are no bad ideas.”

Unfortunately, yeah, there are.

Too many in fact.  At least that’s the way I saw it – but I’m a pain in the butt for most brainstorming sessions.  See, I was raised by an attorney, so every discussion in our house was based on an adversarial discussion.  There was a real logic to the discourse… thrust and parry.  Fact and counter-fact.  Jeez… getting permission to go the movies was exhausting.  I was trained to think linearly and logically.  Not the best guy for a brainstorming.

But… there is a cure.

A couple of scientists at North Dakota State University wrote a paper last year called: “Child’s play: Facilitating the originality of creative output by a priming manipulation.”  Sounds like a page turner no?  However, it is very interesting and something I think HR can use to get more creativity out the staff.

The net of the study is that the scientists took a group of students (college) and randomly assigned them to two different groups. The groups were given instructions like below:

“School is canceled, and you have the entire day to yourself. What would you do? Where would you go? Who would you see?”

The subjects were then asked to write down their answers.

After writing for ten minutes, the subjects were given various tests of creativity, such as trying to invent alternative uses for an old car tire, or completing incomplete sketches. (These are sample tasks from the Torrance test of creativity.)

One group scored much higher than the other.  Why?

Oh, did I mention they added an important introduction to the instructions for the more creative group?

“You are 7-years old. School is canceled, and you have the entire day to yourself. What would you do? Where would you go? Who would you see?”

That’s it.  Those five words added to the beginning of the instructions drove creativity up.

Unfortunately, in business we all want to be “executives.”  Except it is precisely this trait that can hamper our creativity.

The study authors stated that as the brain develops, the prefrontal cortex expands in density and volume and we start to exhibit impulse control and focused attention.  But at a cost.  They speculated that as we grow our prefrontal cortex, we start to repress errant thoughts.  But while we suppress these thoughts, we also suppress the imagination. By thinking of ourselves as a child, we end up thinking in more child-like ways.

Telling employees to think like 7-year olds gives them permission to engage that part of the brain that is more creative and more random.

It gives your staff the permission to not be “executive.”  In my case, it would have eliminated my trained need to be “logical.”

Next time you need some creative ideas, try adding… “Pretend you’re a 7-year old using our product/service/department/etc.”  See if you get something new and interesting.