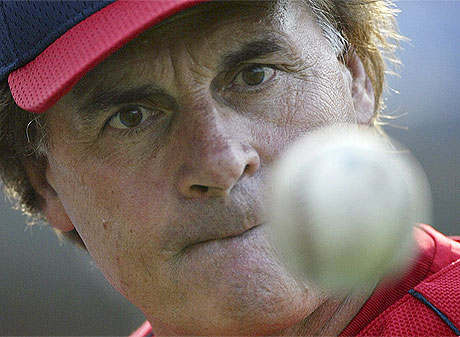 Growing up, my mom took me to Cardinal baseball games every year, even though she didn’t really like baseball. She let me ask 100 questions, listened to me beg for overpriced food and listened to me whine about not catching a foul ball.  Mom knew baseball was important in this town, so she taught me the game. It worked—I am a fan of the franchise in good times and bad.

So I took notice when fellow St. Louisan and really smart guy Dwane Lay from LeanHR told me at lunch that he has boycotted home games since 2008. What? No home baseball in 3+ years? Why would someone take this crazy stand? Dwane told me:

He won’t buy a ticket to a game until Cardinal manager Tony La Russa gets fired or quits.

Unfortunately, Dwane’s stance did not surprise me, because La Russa inspires passion. Some call him a genius and others call him a prima donna, and he is the subject of today’s FOT question:

Can you allow a manager who gets results to lose talented people just because he can’t get along with them?

Dwane is boycotting the Cardinals because La Russa made them trade one of his favorite players, Scott Rolen in 2008, because Rolen and La Russa could not get along. Similarly, the Cardinals, two weeks ago traded top prospect Colby Rasmus after years of reports that the two could not click.

Fans of La Russa call him no nonsense, intense and hyper focused on performance. Critics say he is unable to connect with players, he’s cold, inflexible and a jerk.

You have this guy in your company right now, don’t you? His results trump relationships.

“Tony needs to be in charge at all times. I think he just doesn’t deal well with those who push back too hard. Tony Rasmus (player’s father) said that La Russa  knows how to win, and knows what kinds of players will work for his teams. He’s earned the right to pick those kinds of players.”

Do managers at your shop get to only pick players who will succeed, or are they supposed to develop people, as well? I asked Kris Dunn, Founder of FOT, the HR Capitalist and Cardinals fan, about La Russa chasing off talent:

“I guess the best way to summarize it is that if you’re going to do that, you better win consistently, which he has. People who struggle can’t make calls like that…. Rolen? How could you run him out of town? The guy plays hard and doesn’t mouth off, runs out walks, etc…. Crazy, one of the only things that frustrates me about La Russa.”

So two of the smartest HR guys I know are both frustrated with La Russa losing key players over personality issues. One other note to help provide context: At a charity event I attended, La Russa said this about difficult players: “The coach gets an office, but the player get a locker. The player needs to figure out who is more permanent.”

Tough stance, and I wonder how many companies run the same way. Even if you do win, people inside and outside the organization will think you’re a jerk if you lose good players along the way. Do you need to get along with everybody? No, but watching talent go out the door is a risky way to make a living. If that’s your style, you better win a whole lot.