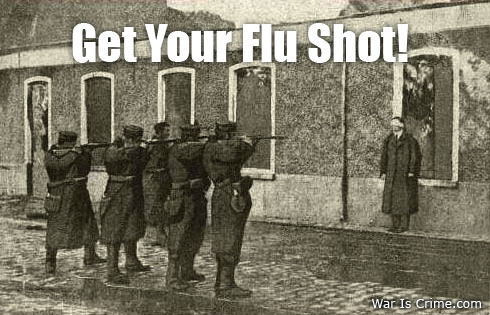 That’s the big question people in Northern Michigan are asking themselves recently when news of a major, award winning, health system in Traverse City, MI came down with a policy that all employees must get a Flu shot, and those who don’t will be fired!  From the Associated Press article:

A major northern Michigan health care group has issued an ultimatum for employees: Get a flu shot by Dec. 31 or get fired.

Munson Healthcare, which includes its flagship Munson Medical Center in Traverse City, says individual rights must be sacrificed for the welfare of patients whose health could be threatened if exposed to flu.

“The people we serve here are very sick,” McManus said. “And I will not put a patient at risk.”

As you can imagine some employees are pretty upset about being told what they have to do, in concern of their own bodies:

But some employees are up in arms over baring an arm. About 50 turned out for a recent meeting of Michigan Opposing Mandatory Vaccines, a Detroit-area group that promotes vaccine choice. Employees also circulated petitions and hope to get the community behind them.

“I have a really hard time believing I’m going to be forced to do something against my will,” said nursing administrator Dianne Lopez-Wild, who works in an office. “It’s like something out of a sci-fi movie. It’s bizarre to me. It seems so unreal.” She said it’s a “civil rights issue.”

There are limited exemptions to the vaccine mandate, such as allergies or faith-based objections. But a religious exemption requires a letter from a pastor.

Personally, I love it!  Let’s face it, most employees wouldn’t get a shot if you didn’t force them to do it. These are the same people who bring 5 gallon buckets of ranch dressing to work, to dip their microwaved lean pockets into, while sitting in the back of your building smoking unfiltered Camel lights, and drinking Diet Coke!

Bravo, Munson Medical Center!  Let me give you one more policy suggestion that I think will be right up your alley! Forced Sterilization!  I mean all those employees missing time to have kids is such a pain! Then you have a good 18 years of dealing with them asking for time off to go to dance recitals, soccer matches, and G*d forbid the little monkeys get the Flu!  You get savings on insurance costs, reduced loss of worked hours, and you can completely eliminate that annoying “Take Your Child To Work Day”!

I don’t know much, but I know one thing – someone’s HR shop just blew up because a senior leader went rogue and no one had the guts to stop them.  Can you say bye-bye to your union-free workplace?