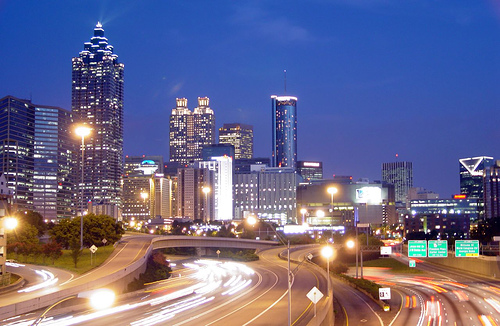 Yesterday I made the 3-hour drive to Atlanta to attend the final day of the two day Atlanta SHRM event in – well – Atlanta.  The drive isn’t that bad – except for the hour it takes to get from Atlanta to Atlanta.

I’m convinced people in Atlanta don’t live in houses or apartments.  They all live in their cars, driving around the city 24/7.  Once you hit about 20 miles from the city you are in a parking lot moving at 70+ miles per hour.  By the time I got to the Cobb Galleria where SHRMATL was held, I was exhausted and my hands and arms were permanently affixed in the 10 and 2 position from gripping the steering wheel.

Working for a Better Atlanta

The title of their event this year was “Working for a Better Atlanta” and that is exactly what they did.  Being a city-based event, most of the folks came to the show then left in the evening.  It was a work day event – and it was all business.  While OHSHRM was all themed up and focused on the “event” – SHRMATL was all about getting work done.

The hall was set up nicely with seating strategically placed between the various sets of booths.  The meeting rooms were set with speakers in the front and 20 or so perfectly-aligned rows of chairs.  Everything about the meeting said – “We are here to get some work done.”

And they did.  According to sources there were upwards of 800 folks at the event.  No booth babes (unless you count my buddy @incblot) but plenty of software providers and benefits folks offering up their logo identified swag.

The event organizers did a great job organizing.  People in the booths thought the traffic was great and they were having some good conversations with the attendees (hope that means the economy is improving.)

That’s the good stuff.  Now the not so good stuff (hell – it’d be a short post if it was perfect right?)

I went to three sessions:

In the south we have a way of saying not-nice things in a nice way.  You just add “bless his/her heart” either at the beginning or the end of the statement.  As in, “Jimmy is pretty stupid, bless his heart.”  Or “Bless her heart, she couldn’t find her butt with both hands.”  It’s a way of softening the blow.  Try it.  Works like a charm.

And for my sessions I’d have to say… “The presenters where very enthusiastic, bless their hearts.”

Raise The Bar – Or Change It

I have faith in the HR professionals out there and I know they KNOW they need to be more strategic.  I believe they KNOW they are important.  THEY KNOW there is a war for talent. THEY KNOW employees are disengaged.  THEY KNOW these things – but in all three of my sessions, the speakers spent way too many minutes at the onset telling us all the exact same things – with the same stats.

I am not an HR pro – never claimed to be.  But I’ve worked with HR enough and been to enough HR sessions to know that most of the people in the audience knew all the things they were hearing.

I know it’s not polite to be a guest at a party and then start talking trash about the other guests but I wouldn’t be doing HR a service if I didn’t give you my honest feedback.  And here it is…

Yup.  I know many times speakers don’t get paid – that limits your pool of potentials.  But I also know there are many HR pros and others who would kill to have the opportunity to talk about HR issues and how they solved – or how they are struggling to solve – those issues.  These are the stories we need to hear in HR.

Raise the bar on the breakouts – that’s where the real work gets done.

Get more HR folks up and involved with the speakers.  Don’t rely on the consultants (like me) to tell the story – involve the HR folks IN the story.

SHRM ATL met my expectations for an HR SHRM meeting.  It did not exceed them.

Thanks to all the folks who put their blood and sweat into the SHRM event – logistically it was great.

But, as for the breakouts – bless their hearts…