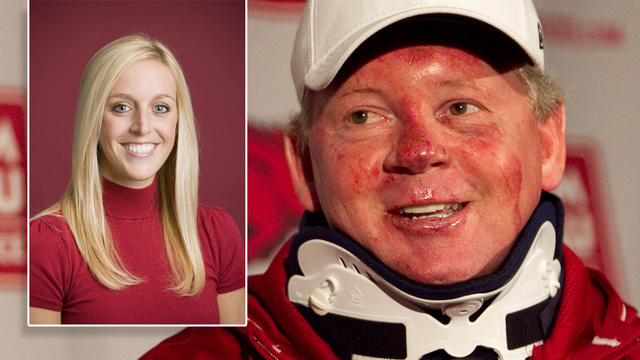 Not sure who Bobby Petrino is?  He’s the former Arkansas football Coach who was fired for a variety of things – hiring a mistress (former volleyball player at Arkansas), giving her $20,000 to buy a car in addition to a $55,000 salary, then having the misfortune to wreck his Harley with her on the back of the bike and lie about.  She’s 25.  He’s 50-something with a wife and four kids.

But I digress.  The thing that made his termination most actionable was his decision to hire his mistress after asking for an expedited hiring process in which 159 candidates applied for the job.  As you might guess, there were some pretty good candidates who never got a sniff/phone interview since Bobby found the most “qualified” candidate.

Jessica Dorrell was the candidate Petrino hired for the Student-Athlete Development Coordinator job in question.  When he asked for the expedited hiring process, Petrino failed to interview the following candidates according to records obtained by Sports Illustrated:

SI went on to cover how at least one of the applicants felt as the case broke in the press:

“Some of those who applied are mad. Ivy, currently an academic coordinator at FIU, believes the hiring of Dorrell will set back women who hope to break into traditionally male-dominated sports fields. “That’s one of the barriers I’m trying to break down,” Ivy said. “You don’t have to sleep your way to the top. There are a lot of women who know their jobs, who do their jobs well and who just want to help the kids.”

Ugh.  And that, my friends, is why you have to be careful when a hiring manager claims he has to get the hire done in days rather than weeks at the expense of a thoughtful process.  Especially when the hire he wants to make is already on the scene (Dorrell was already a fundraiser for the University of Arkansas Foundation before moving to her new role).

Could you use the facts of this case to back a hiring manager down who claims they have to make the offer today?  You sure could.