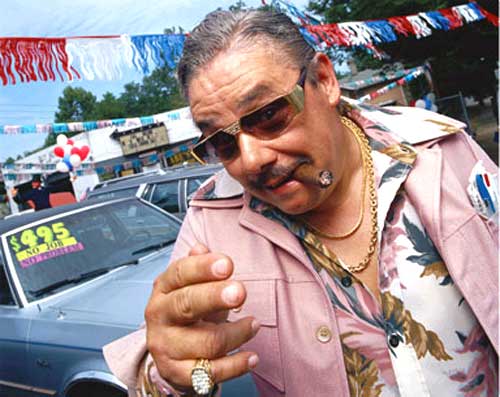 Recruiting is selling. There’s no way around that. You sell the company, you sell yourself and you sell the pay and benefits.

I struggled with this at first because I was trying too hard.  I was too pushy. I was overbearing and I thought that’s what people wanted.

Just like when you car shop, people in the job market don’t want to be shoved into something they’ll regret.

It all clicked as I spent more time around our car salesmen, and I related their techniques to the position I was trying to fill.  And their techniques?  They are not difficult. People leave knowing they got a great deal, and we have a great reputation.

1. Tell everyone you know what you do for a living.  This is your meet and greet.

We are recruiters. We can’t be shy about talking to people about jobs. Don’t turn it on and off as you please.  Your passion for your company will shine and others will start to think, I want to work there, too.

If people are coming through the door in droves to apply for your jobs, that’s wonderful.  But if they aren’t, you need to be out in the community. Don’t hole yourself up in your office, hoping that people will come to you.

Did you like your waiter at dinner?  He’s probably a recent college graduate, who is in the job market.  Give him your card.

You also need to look the part. This is so shallow, I know.  But don’t be out there, trying to sell your company (and yourself) looking like a slob. You expect people to look nice for their interviews, please extend them the same courtesy.

What’s that old saying? You only have one chance to make a first impression.

2. Find out the candidate’s needs and wants.

Okay, so you’ve found your next “customer”.  Let’s get down to business.

When we sell a car, we have to make sure we put that customer in something that makes them happy.  We don’t want them to bring it back, right?  We want them happily driving down the road.

So don’t push people into things that won’t be a good fit.  Find out what they need and want immediately.

How much money are you making?

How are the benefits at your current employer?

What do you think about your current manager?

How much vacation time do you currently have?

Can you travel twice per month?

Figure out what makes this person tick, so you can fit them into your organization.  You don’t want to fill the spot with someone and then have them quit on you four weeks later.

3. Tell the applicant about the features and benefits of working for your company.

Be positive, but be honest.  No one likes a sleazy Used Car Salesman, do they?  So explain the great things about working for your organization without telling a lie. Never tell a lie.

We have the richest pay plan in town.  There is no one else paying on the front and back of each deal at these percentages.

Our benefits only cost $11 per week, and we’ll pay your COBRA premiums until you can come on our plan.

Your manager will not micromanage you here.  We expect you to be able to do your job, and he is busy doing his. He’ll give you all the training in the world, and he expects results, but he will not hover over you.

We will not throw you to the wolves.  We want to provide you with proper mentoring until you feel comfortable to go out there and do it yourself.  After all, customers are expensive and we also don’t want to blow them out the door.

Just address these questions in an honest way, and try to be patient with the candidate. After all, if your car was in a wreck before you bought it, you would want to know, wouldn’t you?

This position is open because the person we currently have is just not performing up to our standards.  This was a hiring mistake.  I know you’ll fix that for us. We need someone to come in here and clean up the mess that was created. You said you like a good project…

If you’re worried about working in a fully commissioned environment, don’t.  We want you to succeed. It benefits us as well. Let me go over these numbers with you so you can see exactly how you would do based on what our people are doing this month and last month.

I am probably not the person to answer that-very-technical-question for you (because we don’t tell lies, right?), so let me have the-person-that-would-be-your-manager talk to you about that (sometimes it takes more than one person to sell a car).

4. Explain why they should work here.

We’re not in the business of bashing other employers. That’s sleazy Used Car Salesman stuff. So DO NOT tell candidates,

Oh, I heard your boss is a real ass.

What?! They want $900 per month for health insurance! That’s crazy!

They don’t pay very well, do they?

Rather, tell them why they should spend their time with you.

We’re growing, and we survived when others folded.

We promote from within.

Meet the manager, heck go to lunch with him.  You’ll really like each other.  I don’t need to be there.

Trial closes are how you test the waters to see where the candidate is at in the decision process.

How much notice will you need to give your employer?

I would like you to take a drug test, so I can get all my ducks in a row for your job offer.

If they aren’t filling out applications, peeing in cups, and telling you they like what you’re saying – you’re not ready to close this deal.

If they need to speak to their spouse about it for two weeks – you’re not ready to close this deal.

Flat out ask them what their concerns are, and address those concerns until you’re blue in the face if you have to. But if you push and they have concerns that you didn’t address – they’ll walk.

Changing jobs is a big deal.  It’s one heck of an investment to the candidate, and it’s personal.  Turn your tire kicker into a buyer.

If everything looks agreeable, go ahead and give your notice. I’ll get this pay plan to you, and you bring it back to me signed on the Monday you begin.

Now we’re looking at calendars and they’re putting in their two week notice.

Oh, and not everyone that comes on the lot buys.  So don’t get down on yourself.  Just move on.