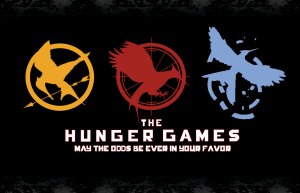 I have two teenagers who live in my house – which means I’ve paid for admission to the movie The Hunger Games roughly 37 times to date.  If you don’t know what The Huger Games is – you live under a rock and/or don’t live within 20 miles of a teenager.  But I’ll give you the parent version of the Hunger Game premise:

2. Dictatorish government wants the rest of the world to provide the “Capital” – rich special people – with everything necessary for them to maintain their lavish, self-indulged lifestyle.

3. To keep control/fear over the “districts” that provide everything to the capital, they come up with a sacrifice game called “The Hunger Games”

4. Each district has to select one boy and one girl (12 districts) to compete in the games to the death each year – last one standing wins.

Ok, so now you’re caught up with your teenager who’s seen the movie 13 times (full disclosure – I saw it once – I liked it – they didn’t pay me for this review).

The Hunger Games got me to thinking about Performance Management, though.  How could an organization use the concept of The Hunger Games to drive better performance in their organization?  I mean we can’t kill employees – (HaHaHaHa! still laughing a little too long, creepy getting quieter laughter, Ha…ha…ha..) I mean we really can’t – not in the U.S. anyway – yet, with Obama still in charge and his pro-employee stances.  So, let’s take that off the board for argument sake – No killing of employees in our HR Hunger Games.

It kind of loses all the energy without death – but I think we can make it work – we can still get great employee performance without threatening death – Did you hear that Baby Boomers!?  You don’t have to threaten death for great performance.  I do think it could have merit, not death, the game and getting better performance.  I mean Welch and GE started the original HR Hunger Games – except they didn’t cut far enough – they only cut the worst 10% – I’m thinking to get really great performance, you need to cut probably 90%!  Let’s face it, your bottom 90% are just bottom feeders anyway – the Top 10% are really the ones carrying your organization!

Can you imagine how good your employees would perform if they knew at the end of the year they would lose their job if they weren’t in the Top 10%.  I mean, we really are onto something here!   The Hunger Games has really gotten me to open my eyes and get out of this “accept average performance” paradigm that HR has been able to sell the last few centuries.  Why should we accept average and below average performance!?  We shouldn’t!

So, here’s the deal – I’m willing to help any organization – free of charge – design and develop their performance management system.  Please just contact me directly to set up an appointment!  Just remember our motto will be “Why be #2, when only #1 will have a Job!”