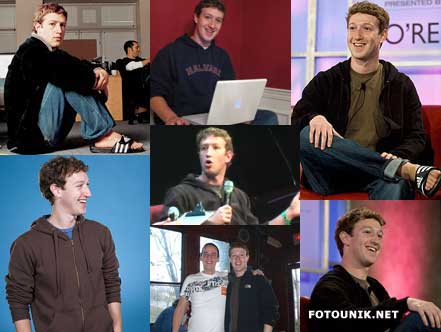 Maybe you’ve heard the news…Facebook is going public.  It is expected to set records.  It could possibly be the biggest IPO Evah!

Facebook has become huge.  It’s rapidly approaching 1 billion (with a B) active users.  They are raking in over $3 billion (again with a B) annually.  Sounds to me like things are going pretty well for Facebook and everyone who works there!  The gang is about to get handsomely rich!!!

Oh wait!  Someone had to go and screw it all up!  Some chump had to go and do something so drastic that Facebook will probably crumble into the San Francisco Bay.  That someone is none other than Facebook CEO Mark Zuckerberg.  His crime?  He wore his trademark hoodie to his investor roadshow.

Now…I understand there’s an East Coast/West Coast element to this.  Not to mention investment millionaire/software millionaire component, as well.  But, a lingering question remains.  Who the hell cares what he’s wearing if he can get the job done?

I’ve never understood why we place such a value on what people wear.  As I look at my own career evolution, I see a drastic difference between the daily tie wearing days as a recruiter in the hospitality industry, to slacks and a polo during my banking days, to my shorts and sandals days at Microsoft.  I can honestly say that what I wear has little impact on my work.  In fact, the little impact it does have is related to comfort.  When I am comfortable, I am happier.  When I am happy, I work better.

Mark Zuckerberg is a bazillionaire.  Once Facebook goes public, he will likely be promoted to gazillionaire.  Not too shabby, in my humble opinion.  Oh…and, guess what.  He did it all in his hoodie.  He’s built a highly successful and popular company of employees that gets it done.  They crank out code and keep us sucked into the e-crack that is Facebook.  They attract advertisers who bring oodles and oodles of money into the company.  And, they do it all while wearing hoodies.  Figuratively speaking.

Why do we care what people wear to work?  Why is Friday the only day that gets to be casual?  Is it really that important that we be suited up Monday – Thursday?

Zuck is a big boy.  At the end of the day, he will leave rich.  End of story.  Bottom line is that he probably doesn’t care if the Wall Street crowd thinks he’s immature.  At 27 years old, he is likely more successful than everyone he’s met on this roadtrip.  But, the rest of us aren’t Zuck.  The peeps who work for us aren’t Zuck.  They need to care what others think.  But why do others think that they’re better in slacks and a tie?  Why can’t employees be just as great in jeans and a hoodie?