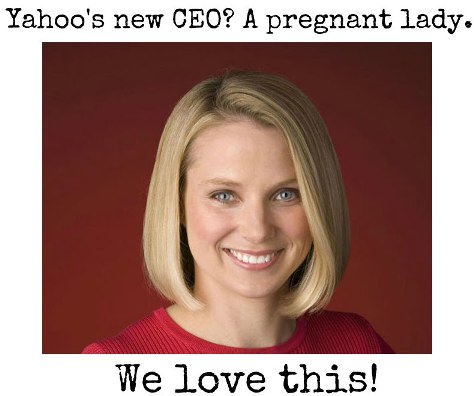 *standing ovations all around*

When I heard about Yahoo’s new CEO (Marissa Mayer) being six months pregnant, and only being 37-years-old, I just knew – this woman must be simply amazing.

Not only is she a girl, but she gets picked to be CEO with a maternity leave scheduled in her near future.  Women everywhere can rejoice!

Maybe these vaginas don’t make us look so stupid after all, right?

Here are just some of her qualifications:

Yahoo and Mayer are being super cool about the soon-to-be maternity leave. Yahoo is moving the September board meeting to her, and Mayer is taking a shorter leave while working from home.

So you can imagine my shock, as I laid in bed sick yesterday, with a pile of used Kleenex surrounding me, watching Barbara Walters and Sherri Shepherd set working moms back about 20 years.

Know going into this, my mother doesn’t like that I’m about to rip into Barbara Walters since, in her opinion, “she’s a legend, and she’s kind of getting old so she probably doesn’t know what she’s saying anymore.” Okay, Mom, I’ll keep that in mind. Although, I doubt that’s the issue.

So here’s what happened on yesterday’s The View:

And then, surprisingly, Elisabeth Hasselbeck chimes in and saved all of their hind ends. Elisabeth cheered Yahoo and said it was a step in the right direction for women everywhere. Elisabeth, I actually 100% agree with you on this one.

Watch it for yourself (video courtesy of abc.go.com and my iPhone – email subscribers click through to view):

I think most of us working moms can agree, we’ve all worked from home on those maternity leaves.

And I don’t really know a lot of women who have a “seat at the table” that stay out for a full twelve weeks. I sure didn’t.

As a matter of fact, we found out our Chevrolet franchise was one of the 800 General Motors franchises to be slated, all as I was pushing out my daughter.

Would you like to know how long my maternity lasted? 4 days. She was born on Thursday. I was working by Monday. Not full time by any means, but I was in meetings for a couple of hours here and there, logging in at home, and deciding which 84 people were about to lose their jobs.

Do I regret the super short leave? Nope. Not a bit.

I have the best nanny in the world for a reason. Is she raising my children? Sure, from 8:30am to 6pm, Monday – Friday. She’s become an honorary member of our family, and she’s a damn good mother. I already had complete trust in her before Lilah was born. Just like my company already had complete trust in me. By no means did they require my presence during my maternity leave. I insisted upon it. Jobs were at stake, and I knew these people better than anyone else in that room.

Little Lilah Paige Soleau had her very own “seat at the table”, a fancy Fisher Price swing, one you can plug an iPod into, was placed just for her… in the company conference room.

That’s the reality of powerful working mothers, Sherri and Barbara. We don’t have to be there. We want to be there. There’s no such things as work-life balance. It’s life-life balance. We make all aspects of our lives work together.

The market crisis didn’t stop for my maternity leave.

The Big Three didn’t stop for my maternity leave.

My company didn’t stop for my maternity leave.

And it doesn’t make me a bad mother for wanting to be there, wanting to keep doing a great job, for a great company. A company that I love.