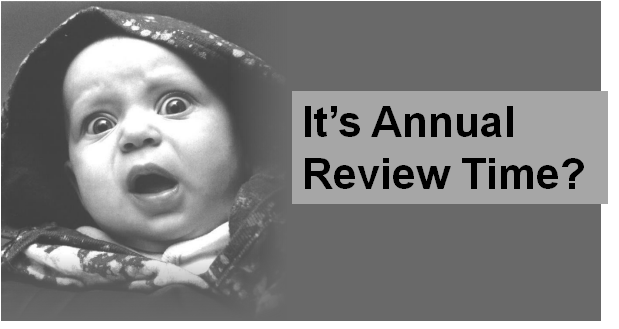 Bear with me… this is kinda a long post but IMHO it can have big impact on how you make decisions on performance.

There is a lot of chatter on the interwebs about the death of traditional performance reviews.  Many HR pros and consultants saying we’ve outgrown the process and are suggesting that using social media thinking, real-time data, even recognition events as performance touchstones (I wrote about this here) should be the basis of evaluating performance.

In many cases the argument is that performance is a moving target, change happens too quickly and therefore the performance 8 months ago may have little impact on the required performance today or in the near future.  They talk about how one-sided reviews are and how 360 reviews create potential problems when they are “anonymous.”  The argument is made that one manager controlling the process injects biases and problems.

But a couple of articles are giving me pause when thinking about how to make better performance decisions.

There is a big difference between information and data.  Data is what it is.  There is no real value in data.  Data becomes valuable when it becomes information.  The problem is you never know when that happens.  Data is noise.  Information is signal.

I direct you to an article on the blog Elezea posted back in May about being careful who you listen to.  In that post the author brings in some information from Nassim Taleb (The Black Swan, Fooled by Randomness – two MUST reads btw.)  The post references information from a post on Taleb’s new book (Antifragile: Things That Gain from Disorder.)  Paraphrased and edited from that post:

The more frequently you look at data, the more noise you are disproportionally likely to get (rather than the valuable part called the signal); hence the higher the noise to signal ratio…

…Say you look at information on a yearly basis, for stock prices or the fertilizer sales of your father-in-law’s factory, or inflation numbers in Vladivostock. Assume further that for what you are observing, at the yearly frequency the ratio of signal to noise is about one to one (say half noise, half signal) it means that about half of changes are real improvements or degradations, the other half comes from randomness.

But if you look at the very same data on a daily basis, the composition would change to 95% noise, 5% signal. And if you observe data on an hourly basis, as people immersed in the news and markets price variations do, the split becomes 99.5% noise to .5% signal. That is two hundred times more noise than signal which is why anyone who listens to news (except when very, very significant events take place) is one step below sucker.

Think about that for a minute.

The more we look at the measure of something (especially something with qualifiable content vs. pure quantifiable outcomes) the more we inject noise into the stream and the more we hide signal.  This seems to me to have a profound impact on the idea of doing away with an annual review of performance to make way for a more “real time” view – and “real time” intervention.

Think about how you manage your investments.  Do you buy/sell each day?  Do you watch the numbers hour by hour, minute by minute?  Probably not.  You probably have an innate understanding that the market is volatile and you’re more interested in long-term results vs. short term gains.  You know it doesn’t make sense to judge the value of an investment based on a few data points within a small window of time.

But let’s add a little something else to the mix.

In addition to the simple problem of signal to noise ratio is the problem where information that we think adds value but doesn’t.

A very interesting article on FastCompany ran back in August about an experiment on deciding whether to give someone a loan.  (I suggest you could substitute giving someone a loan with the hiring process and put in some other variables.)

To shorten the discussion a bit here is my synopsis of the experiment:

Participants were divided into two groups. Group 1 was asked to decide on a loan for

a recent college graduate with a stable, well-paying job and a solid credit history but during the routine credit check they discover that for the last three months the applicant has not paid a $5,000 debt to his charge card account.

Group 2 was given the same info with a slight twist:  instead of learning the exact amount of the student's debt, they were told that the size of the debt was unclear – either $5,000 or $25,000. Group 2 participants could decide to approve or reject the applicant immediately, or they could delay their decision until more information was available, clarifying how much the student really owed. Not surprisingly, most Group 2 participants chose to wait until they knew the real debt number.  After a bit of a wait the experimenters told Group 2 it was $5,000.

So – for all intents and purposes the two groups got EXACTLY the same info but one had to ask for it and wait while the first group got it all in one fell swoop.

The results are pretty amazing…

What changed between Group 1 and Group 2?  Why is $5,000 in debt enough to bounce an applicant 3/4ths of the time when it’s known up front and yet it only mattered in about 1/5th of the instances when the information was requested later?

Put that in performance appraisal language – or even hiring language.  Do we tend to make different decisions when we have more data?  Or when we think we’ve done a better job by seeking more data?  Maybe.

The real issue here is whether $5,000 is the right number regardless of what that number “could” have been.

A Long Road/Read to Get Here:  More Often and More Isn’t Always Better

My thinking as I read these two articles is this:

As I read those two articles all I could think of is the poor employee who is being judged often and quickly on bits of data with and without context and wonder if they would be better served if their manager had spent more time waiting for more signal and seeking context rather than reacting to the company social feed and last week’s typo-laden presentation.

Should we consider the annual performance review again?

I’ll leave you with this quote from Nassim Taleb…

In business and economic decision-making, data causes severe side effects —data is now plentiful thanks to connectivity; and the share of spuriousness in the data increases as one gets more immersed into it. A not well discussed property of data: it is toxic in large quantities —even in moderate quantities.

Are we creating more bad decisions because we think we’re getting better information more often?