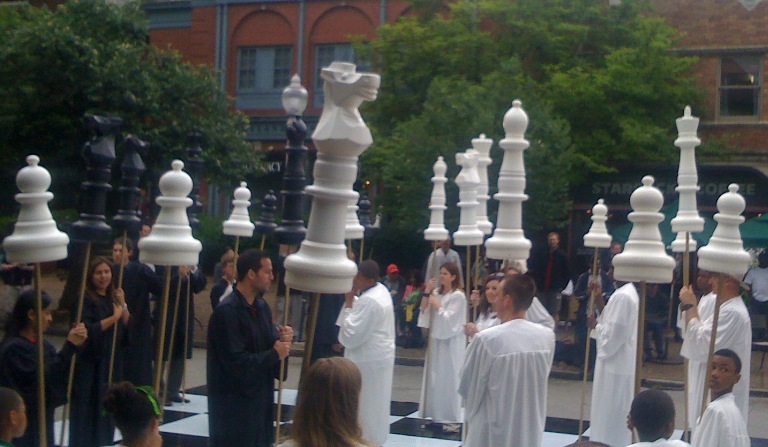 Companies have a number of resources at their disposal: patent resources, real estate resources, IT resources, and of course, human resources.  Any CEO has at least mouthed words to the effect that “people are our most important resource.”

But, every so often, a momentary lapse that some executives regard their employees as being on the same level as their furniture.  We are game pieces on their board.

Take David Siegel, the CEO of Westgate Resorts.  They’re a privately held company that builds timeshares.  He recently sent an email to his employees, telling them in part:

The economy doesn't currently pose a threat to your job. What does threaten your job however, is another 4 years of the same Presidential administration. […] If any new taxes are levied on me, or my company, as our current President plans, I will have no choice but to reduce the size of this company. Rather than grow this company I will be forced to cut back. This means fewer jobs, less benefits and certainly less opportunity for everyone.  So, when you make your decision to vote, ask yourself, which candidate understands the economics of business ownership and who doesn't? Whose policies will endanger your job?

As employees, we've come to terms with the fact that our boss controls how much we make, when we show up to work and go home, and what we wear.  What kind of God-complex does it take to think that you should also be telling employees how to vote?

(Answer: the same kind of God complex that says you need a 90,000 square foot house)

And, does anyone want to go work for this guy?  Or even continue to work for him? (If you read the rest of his letter, you'll also discover that his employees are lazy and less motivated than him.)

Or take Darden Restaurants, the company that ow

ns Olive Garden, Red Lobster, and Longhorn Steakhouse.  They've identified the loophole in health-care reform: it only applies to employees who work more than 30 hours per week.  So Darden is now publicly experimenting with keeping all of its employees below 30 hours.

So, let’s say you’re the top performing waitress at the Olive Garden.  All of your tables order wine and dessert, and you cover shifts whenever asked.  In other words, you’re a great employee and make Darden a lot of money!  I’m sorry, but at 29.5 hours, you need to go home.  It’s not worth it to us to shell out $5K a year for your insurance; we’ll just have someone less qualified take your tables when you go home.

For a good case study of what happens when you start treating employees as replaceable commodities that don’t need incentives for performance, duck into your nearest Circuit City.

I understand that companies that don’t currently have group health insurance are worried about the costs.  If you regard your employees as a giant cost to be managed, then you’ll threaten their jobs and cut their hours.  Eventually, your employees will give you a level of performance consistent with that amount of respect.  But there are better, more employee-centered ways of approaching it.  Papa John’s Pizza was less willing to throw their employees under the bus.  Instead, they've announced that healthcare reform will mean an extra $0.15 cost to their pizzas.  I think we’ll be OK with that.

Our job as Human Resources professionals is to help get the best possible performance and results out of the humans who are our company’s resources.  That’s going to be much harder to do when your employees discover that corporate management’s overall distaste for them.  We human resources like to think that management sees us as more than chess pieces to be moved around and directed.