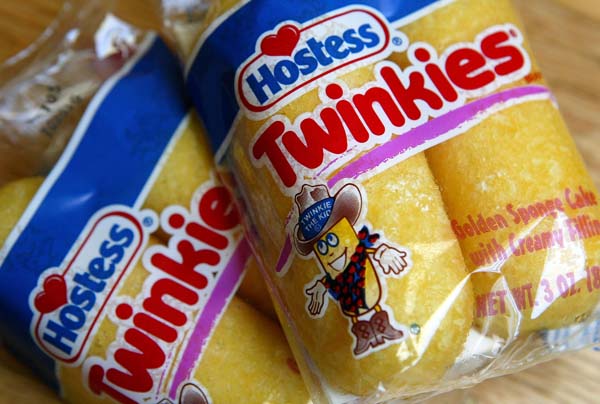 When all of this Hostess stuff started to go down, my first thought was to stockpile every single Twinkie I could find. Next to Little Debbie”s Oatmeal Cream Pies, Twinkies are probably my favorite guilty pleasure. I mean, is there a more delicious

golden sponge cake in the world? Mmmmm. Just thinking of them makes my mouth water and my eyes well with tears, filled with sadness like a Hostess cupcake filled with some weird, unnamed creamy something.

My original idea was to write a post about how much unions suck. The first reports from last week indicated that it was the union doing what unions are so famous for doing lately: holding up business while the union fights for raises that may or may not be deserved. Hostess came out swinging, talking about how they had already made deals with the other unions. There was only one hold out. The Bakers” union. These greedy sons- of-britches had the gall to say “No Way!” Once again, greed leads the way, and because of this greed, I am left without my disgustingly delicious attempt at baked goods.

But then, as I was writing my rage, I started reading more and more about the conflict between the union and Hostess. Now, I would like to personally extend the leaders of Hostess my congratulations. You have actually gotten me to support the union. I feel a bit dirty.

First of all, let”s get one thing out of the way. Both sides are claiming that one of the reasons the company is failing is because Americans are becoming more health food conscious. All together now: POPPYCOCK!!! Some Americans may be trying to eat better; but not enough to put a company out of business. If that were the case, you would not have the Double Down or the Doritos Locos Taco (which I am still baffled that it took them so long to come up with this idea) or the Twinkie Weiner Sandwich (you seriously gotta try this one)! Not to mention McDonalds, Coke or Little Debbie, which seem to be doing just fine.

Another claim is that the unions are the reason for the failure. This one union, specifically the Bakery, Confectionery, Tobacco Workers and Grain Millers International Union (which I totally don”t get, but finally understand why their junk is so addicting), has refused to budge. They won”t take pay cuts, unlike the other unions. They won”t change their benefits, unlike the other unions. Clearly they are greedy. Except when employees start commenting that they would prefer to lose their job than receive yet another cut from their employer, something is clearly not kosher…unlike Hostess donuts, which are.

There is one simple reason why Hostess is failing, and it is not because the union pushed back. It”s because it”s run by idiots. The company is filing for bankruptcy for the 2nd time after seeing profits go down by over 24% since 2004. This is a sure sign that changes need to be made, right? Clearly, the company is heading in the wrong direction, right? Smart companies would fire their CEO, or at the very least, some of the upper management. Apparently, however, Hostess thought the better route was to give all the bigwigs raises! I am not opposed to people making obscene amounts of money (unless it”s Arod). You hire smart people by paying them in increments of $1 million. However, if Hostess was publicly traded, the shareholders would have thrown them out faster than you can say “Where”s the cream filling?”

I am not a union guy. Not at all. I very rarely agree with striking employees. My philosophy is, if your job is that bad, find another one. But, it”s really hard to argue that with this one. If I put myself at the table, I think, Hmmm…so, you”re filing for bankruptcy, again. You just gave 70-85% raises to some of the most ineffective executives in history. And, you want to cut wages of your lowest paid staff? Hellz no! I won”t agree to that! If I am going down, I am taking you Ding Dongs with me!

Curse you, Hostess, for making me side with the union.

Now, I am going to go finish my Christmas shopping. WalMart has been open for 72 hours straight. I”ve probably already missed the good deals.