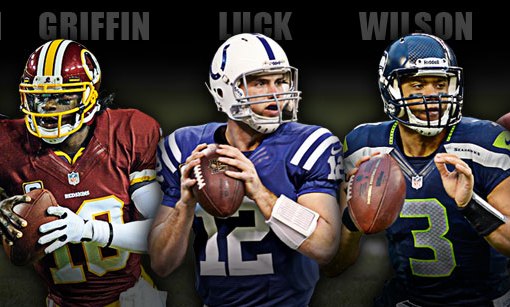 Anybody out there watch football?  There's a big game coming up.  You might have heard of it.

how to make penis longer

It's been a great football year!  Particularly, when it comes to this year's batch of rookie quarterbacks, all candidates for NFL Rookie of the Year.  You may have heard of them.

First of all, the big name…Andrew Luck.  Some of you may have heard the term “Suck for Luck?”  This line was a line used by poorly performing teams.  The implication was that, since the team wasn't going to make it to the playoffs, they should start losing every single game in an effort to get the first pick in the draft and draft Andrew Luck out of Stanford.  Luck threw over 4000 yards and 23 touchdowns.  He took his team, who ended the previous season in the dumpster, to the NFL playoffs.  He also broke the record for most passing yards in a season by a rookie.  Andrew Luck made $5.5 million last year.

Second was a guy, near and dear to Jessica Lee's heart, named Robert Griffin the Third…better known as RGIII.  RGIII is the 2011 Heisman Trophy winner coming out of Baylor University.  He was picked #2 in the draft by the, almost, buy not quite as sucky, Washington Redskins.  (Aside: How the heck does a team have a name like “Redskins” in 2013?)  RGIII became the youngest player in NFL history to achieve a perfect passer rating in a game against the Philadelphia Eagles.  He is also the first rookie in NFL history to pass for 200 yards, pass for four touchdowns and rush for more than 75 yards in a single game.  He rallied a city and took his team to their first playoffs since 2006 where they were def

how to win her back

eated by a clearly superior and much more awesome team.  Griffin took home $5.3 million dollars and a hefty sign-on bonus.

Finally…the obvious choice for Rookie of the Year, the shortest of the batch, Russell Wilson.  Not much was expected of Russell Carrington Wilson.  He was picked #12 in the third round.  #75 overall.  He was joining a team who just signed another quarterback for $6.5 million a year.  Wilson was part of a series of picks that caused one wannabe sports writer dub the Seahawks the biggest losers of the NFL draft.  Interestingly, Wilson came in, won the starting QB job, threw for over 3000 yards and 26 touchdowns, and ended the season with a QB RAT of 100.  Oh, and he broke Peyton Manning's rookie record for most touchdowns thrown in a season.  At the end of the year, Russell banked $5 million!  Wait…that's wrong.  Typo, sorry.  Wilson brought home $526,217.

So, now that I have bored you with a statistical recap of the year these players had, allow me to get to my point.

Did you know that, per the NFL Player's Association collective bargaining agreement, rookies are prohibited from negotiating their contracts until after the first 3 years?  It's not often that you hear about a union negotiating to keep their players from making more money.  But, it does fall right in line with the practice of rewarding seniority over performance.

That's really all I had to say.  Nice job, Russell!  Go Seahawks!