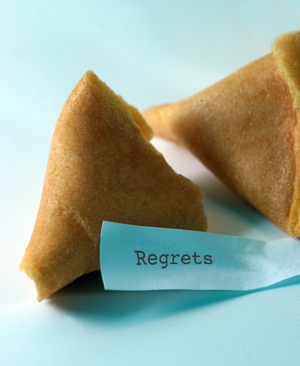 how can i get back with my ex girlfriend

One of the most read blog posts I've written in the last two years is: How To 'Really' Get An Entry Level Job.  It's pretty basic, straightforward advice on how I would go about finding an entry level job, if I was just coming out of college.  One piece of advice I didn't give in this post, but I highly recommend, is to accept a job you're offered, even if it's not what you want to do.  Why?  It's easier to find a job, when you have a job – and let's face it – you're entry level – you think you know what you want to do, but you really have no idea what you really want to do.  I mean when I was entry level coming out of college I wanted to be the Head Coach of the Los Angeles Lakers and today – well, I still want to be the Head Coach of the Los Angeles Lakers – but I was advanced coming out of school, you're not.

I will admit that regardless of your first job strategy, you're going to have some regrets.  Here's a few that come to mind:

1. Not Negotiating – You won't negotiate, because it's your first job and you think you can't.  You'll regret this.  Negotiate like you've actually got something the company wants, because you actually do, that why they made you an offer.  HR Pros, like me, will tell you stuff like “sorry, we can't do that, its policy” – which is sometimes true, many times not.

2. Not taking the other job – If you are lucky enough to have more than one offer, or potential for another offer – you'll regret not waiting to see if that would have been better.  Even if you wait, or both offers come through at the same time, you'll still regret taking the job you did the first time your job becomes a pain – and it will – it's c

how can i get back with my ex girlfriend

alled a 'job' for a reason.  Just know this regret is normal and that the other position would have been a pain as well.  Every job has some crap you won't like – don't lose your mind – it's a normal feeling.

3. Not Signing Up for 401K – I'm young, I've got 40 years to save for retirement, I didn't pay attention to basic concepts of compound interest.  Laurie Ruettimann hates 401ks, but I don't – I love them! Especially for young professionals who take advantage of them early.  It's the last American Dream, besides the Powerball, that we have.  Take advantage. Of 401k, not Powerball. It easy to transfer to your next employer – and you'll never regret doing this, but you'll definitely regret not doing it.  Believe me, I've spoken to thousands of over 50 employees who've had to come to the realization that after retirement, a part time greeter job at Walmart will become a way of life. That sucks!

4. Not joining the company softball team: I know, again, you're young and you already have friends – many of whom are still finishing up that 5th or 6th years of college – I don't need more friends.  Your career is very long.  You have no idea where your coworkers will eventually end up, and in what positions.  Some of my first job coworkers are now in senior executive leadership positions Fortune 500 companies. Besides hating them for their success, I'm glad to still call them friends and have shared some great times together when we were younger. So, now when I call, they pick up the phone. Besides, you don't actually have to play softball, you just have to be able to drink beer.

What regrets do you have from your first job? Hit me up in the comments.