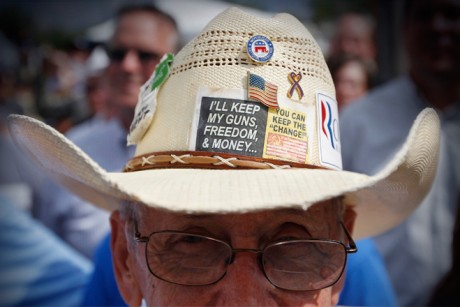 Before you go all Obama on me, let me explain.  A Stanford Business School economist recently studied the impact of political partisanship and attractiveness – believing that people find those of the same political party that they share, more attractive than someone from an opposing party.  From the article in Slate:

“In the first experiment, 197 subjects were brought into a Stanford behavioral lab and shown profiles of fictional people. The profiles were made to look just like those posted on dating websites. The researchers could play with different variables—such as keeping the photo the same while switching the fictional person’s religion, level of educational attainment, or political preference.

The results showed that religion could cause a 4.5 percent swing in how eager a subject was to date a fictional prospect. Education had a 3 percent effect. And matched political ideology also had a 3 percent effect. Even if the fictional person’s photo stayed exactly the same, ratings of physical attractiveness increased by 2.2 percent if the fake person listed a political preference that was the same as the profile viewer’s….Next comes shared religion, which predicts a 50 percent interest boost. Shared ethnicity increases interest by 16.6 percent. Education has a 10.6 percent effect. And shared political partisanship raises dating interest levels by 9.5 percent.”

Now, let’s think of ‘dating interest levels’ in terms of ‘recruiting interest levels’.  There really isn’t much of a difference – like dating, in recruiting we are trying to find those who we are interested in, and those who are interested in us.  So, this begs the question – Should you share what political party you prefer to your potential candidate pool?  Think Google with billboards all over Silicon Valley that say “We Love Democrats!”

I think 99% of HR/Talent Pros would say – “Heck No!  We are ‘equal’ we love everyone the same!”  No you don’t, be honest.  If you really want high engagement and ‘cultural fit’ and 90% of your workforce votes Republican in nature – hiring more Dems doesn’t raise your numbers!   “But Tim, we are inclusive!” Why?  Why are you inclusive?  “Because inclusive organizations perform better.”  Really?  Show me that study.  The organizations in the study you’re referencing – are they like you? Same industry?  Same demographics?  Same location?  Are you sure inclusion, in your environment, leads to higher engagement? Do you have the data?  Or, does inclusion, in any form, just make you feel more politically correct?  “It’s the right thing to do.”

Here’s what organizational researchers have known for years, but because it’s not politically correct, so media doesn’t report it – inclusion isn’t for everyone.  If you live in a mostly African American demographic area/labor pool and your workforce is 100% African American – adding white, Hispanic, Asian, etc. workers to your mix – will lower your overall engagement scores – which – connect the dotted lines – lowers your overall bottom-line performance.  If you run an organization that relies on delivering the same product or service – time after time – you’ll find this to be true.  Think manufacturing and call centers.  If you run an organization where innovation and critical thinking are a must – this is not true! Think high tech, design and healthcare – studies in these fields shows inclusion to have a positive impact.

In today’s world it sounds almost blasphemous that someone would tell you -“I will only hire Republicans” – the media would have a field day with that employer.  Yet, research continues to show us that not everything we do, works for every employer.  While your emphasis on Inclusion might be great for your workforce and bottom-line.  That same exact plan could drive another business, out of business.  Drink the Kool-aid kids, but educate yourself as well – there’s a reason Congress doesn’t get along and can’t get anything done – do you want that to be your workforce?