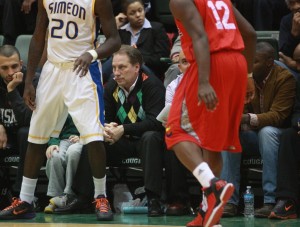 Have you guys ever seen a top level athlete in high school get recruited to play college sports?  I'm not talking about your best friend Mary's son, Billy, who hit .338 his senior at Northern High and is getting a partial scholarship to St. Mary's Western Community College.  I'm talking top 100 kids who have offers from USC, Notre Dame, Alabama, Texas, Florida, Ohio State, etc.  Kids who get hundreds of text messages per day, phone calls from morning until night, separate deliveries from the Postal Service, UPS and FedEx – each day.  Kids who go to play a Tuesday night non-league game against a team that has won all year and 37 coaches are in the stands only to watch them play.  The coaches can't even talk to them after the game because of NCAA rules, but it's important they are there to be seen.

Schools do this, because there are millions of dollars at stake.  Sportswear apparel contracts, TV contracts, etc.  College athletics is a big time business – it's important for them to recruit the best talent to stay on top, or get to the top. Recruiters spend weeks on end and long hours recruiting top talent, sometimes over 4-5 years.  They'll travel thousands of miles to stand 100 feet from a recruit, hoping the recruit notices they are there.  Schools will spend hundreds of thousands of dollars recruiting kids each year.  One recruit might cost a school a million dollars over a 4 to 5 year recruitment cycle.  Crazy, isn't it?

For what, really?  These kids will play basketball/football/etc. Whether they play for Florida or USC, it doesn't really matter – there is really no major difference between the two.  I know alumni will all disagree – but a high performing major DI school – the overall difference is very small. Sounds like many major employers, right?  What's the real difference between working at F

acebook or working at Google if you're a developer?  Work, pay, crazy benefits are virtually all the same.  Sure they try and sell you that they are different, but not really so much.

I'm waiting for one company to turn recruitment upside down.  I'm waiting for one company to decide, we are going to go after talent like Nick Saban goes after talent at Alabama.  We are going after talent to win – not a national championship, but to win our industry – to be the best, to develop the best, to crush our competition.  Can you imagine what that might look like?  I'm guessing recruitment would become pretty important to your organization.  I'm guessing recruiters would probably not sit at a desk all day hoping talent sends them a resume from their posting on the corporate careers site.  I'm guessing your recruiters would know exactly who they were going after them, and they would find them – where they ate lunch, where they worked out, where they went to dinner, went on vacation – and they would show up and start building a relationship.  Your recruiters would have multiple people they were pursuing over years and everyone would know.  Publicly, it would be known – “Google wants Tim Sackett!”  Tim Sackett would know and feel how much Google wanted him.  He would be pursued, just like he was the next great quarterback coming out of high school with a golden arm.

Can you imagine how that would change the game?

Ultimately, the talent you recruit is no different than those kids being recruited to play athletics.  Those recruits will make millions of dollars for their schools.  Your recruits will make millions of dollars for your company.  The difference being – most the talent you recruit – comes with a proven track record.  You just need to get out from behind the desk and start finding out who is the best.  I wonder which company will do this first, to truly go out and start recruiting talent to come work for them – like they mean it!