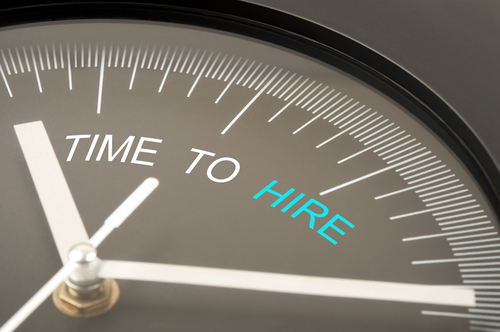 I’ve complained in the past about certain old skool HR metrics that are still hanging around in our organizations even though they don’t really matter (at best) or actually damage an organization (at worst). But many of us still diligently report on them regularly even though deep down we know they don’t mean jack. Now I’ll be the first to admit that until recently I thought that tracking and reporting on time to hire was important. I mean, finding the right people as quickly as possible is important, right? Well, I still believe in half of that statement – finding the right people is critical. But I’ve become less sure that time element is as critical for several reasons:

It places the emphasis on speed and not quality.  If you’re trying to build a long-term, sustainable business (which I assume we all are trying to do) then does it really matter whether it takes you an “extra” few weeks to fill a role?  If you answered yes, then I question whether you are really thinking long-term.  Before you know it, success becomes “improving” your time to hire metrics and you lose sight of what really matters – was the person a high performing, long-term employee?  Which leads to my next point…

On average, it ends up being in a pretty tight range.  Let me guess – for most of your positions it takes somewhere around 60 days to fill an open position.  Yeah, you have the occasional 30 day fill and you have occasional 90 day plus fill but for the most part you end up right around 60.  Unless that number dramatically changes (and I don’t mean we “improved” from 60 to 58 days) then I’ll assume it’s around 60.  Maybe it’s not 60 days for your industry but you get the point.

It takes time to recruit top talent. The best of the best generally out pounding the pavement looking for a job.  Instead, they’re happy where they are working, are compensated very well, and need to be convinced to leave.  It’s kind of like the girl in high school you asked out 25 times before she says yes – it takes persistence, little (or no shame) and most of all time.  True top talent have many choices about where and with whom they want to work.  If you hire “top” talent in less than a month then a)you got really lucky or b)you ain’t recruiting top talent.

You need time to get to know someone.  In reality you knew really know but what I do know at this point in my life is that it takes more than just one round of interviews to get a true picture.  First round is interview mode – you don’t see the real person (most of the time).  Second round, you see a little bit more of the real person, they’re more relaxed and we’ve gotten over the standard interview questions.  See them a couple more times and you start to have a normal conversation with them and let’s be honest – yes, skills matter, but if you have made skills and you’re a jerk it doesn’t matter.  You need time to sniff out the jerks!


Ok, so what?  Well, this is going to sound pretty simple but sometimes simple works best.  Figure out which positions in your company are dependent on relationships for their success and design a process where you give the key people the new hire will be working with multiple opportunities to meet the candidate.  It’s like dating in a way.  You decide over the course of several weeks if this is someone you want to hire (date) and you do that by getting to really know the person in different settings.  Take them to lunch.  Take them to dinner or drinks.  Go for a run with them.  See them in groups, see them one on one.  You get the point.  In my opinion you only get to know someone when you get to see them from different vantage points.  No, this process doesn’t make sense for every position you’re recruiting for but it sure does for the mission critical ones.