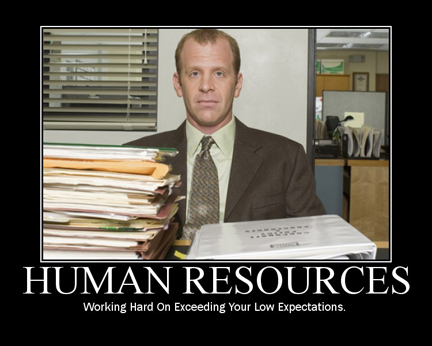 I hear it all the time, “We’d be so screwed if we had a normal HR person. I’m so happy we have you.”

Not really. You’d just be screwed if you had someone who wasn’t a real person, trying to manage real people.

I’ve worked my way up through this company from an HR Assistant to the HR Director, I’ve traveled around and spoke to large audiences about HR, and I’ve been recruited by companies that would blow your mind. I’ve done all of this, and I am only 33-years-old.

I’m not being braggy. I just want to tell you what I’m doing is different. Seriously, you can roll your eyes at me, and say you’ve heard this all before, and that you’re different, too. But, maybe, just maybe, one of the things will help you get ahead in your career or get that raise you deserve!

So I’ve asked around the company, and this was the feedback I received about why I am different than other HR Pros.

Hey, Meredith! What did you do over the weekend?

Oh my gosh. We had so much fun! Shaun and I went to Chicago and partied like rock stars! Have you ever tried an Irish Car Bomb shot?

That? Probably isn’t the water cooler conversation you’re having with your staff.

Why aren’t you like this? Why aren’t you being real with them? Are you too good to admit that you, too, like to let your hair down once in a while? Why are afraid to say it? Are you better than your employees?

Because when you act like a prude, you come off like you’re better than everyone. And that’s a fact.

Is your position in your company somehow better than theirs? If you say, “Yes!” to that question, please call me right now so I can tell you why you’re a sucky person. My cell phone number is (419) 266-0966.

OMG. I see so many frumpy HR Pros.

Stop it. Stop it right now.

It sucks, but this is a shallow society. So you cannot keep wearing that sweater with fuzz balls all over it. You will never be promoted if people overlook you because you’re blending in. So dress like the job you’d like. Each culture is different. So if it’s jeans at your work – you wear jeans with the best shoes ever. If it’s business attire – you wear a suit.

Ladies, you put on make-up. Men, you stop wearing white socks with dress shoes. And everyone needs to iron their clothes. Ain’t nobody got time for people who look like they just rolled out of bed!

I know how we love to enforce all of the rules in HR. But sometimes, people have a special circumstance. Sometimes there is a grey area. Sometimes you do things for your people that neither of you ever discuss again.

What are you doing with an ex-employee who ran out of COBRA, is too sick to work, and is still waiting for his Social Security hearing? How can you legally get rid of that woman-over-forty-who-no-one-likes?

Finding the answers to the hardest questions set you apart.

When you find ways to be creative and get the REAL job at hand done, and you stop telling people, “That’s impossible,” you become beyond valuable to your people, your managers, and your CEO.

When I began at the dealership, our turnover rate was 66%. SIXTY-SIX.

To stop this, I began promoting from within. This suddenly became a place you wanted to work. No longer do the employees worry that they will wind up with a manager who doesn’t understand our culture (and fires them all to bring in his own staff).

The employees are now letting me know if they’d like to be promoted. When they let me know they would like to move, I put them into a mentorship program. This way, when it is time, they are ready.

Today our turnover rate averages around 8% per year. EIGHT.

I know some of you have gigantic budgets. Big, huge, budgets.

I used to have a big budget. And then, in 2008, the auto industry took a big dump. We were hit pretty hard, and I had to figure out how to do more… with less.

Today, I could have a big budget again if I wanted it, but I won’t do it. I refuse to waste money. You just never know when that money, you spent on some software you didn’t really need, will save someone’s job.

And I know you feel like you neeeeeeeed all the latest and greatest things. You neeeeeeeed to have 50 people working in your HR Department. But I promise you, and I would know, you don’t. You just don’t.

Be valuable to your company by finding ways to save them money.

6. Be honest. And say you’re sorry when you mess up.

Wow. I make a lot of mistakes. Maybe this isn’t an article I should be writing.

But when I make these mistakes, I say I am sorry. And I tell my boss right away so he can give me advice and help me clean up the mess. There’s no sense in hiding your weaknesses. Everyone sees them. So just be accountable. And stop trying to make things work that are not working!

You work for two sections if your company. You’re in a weird spot. I “get” it. It is your job to bring management and employees together. So make that process as easy as possible FOR THEM.

Now it’s your turn! Share with others how you became successful in your HR career! Let’s help each other out today!