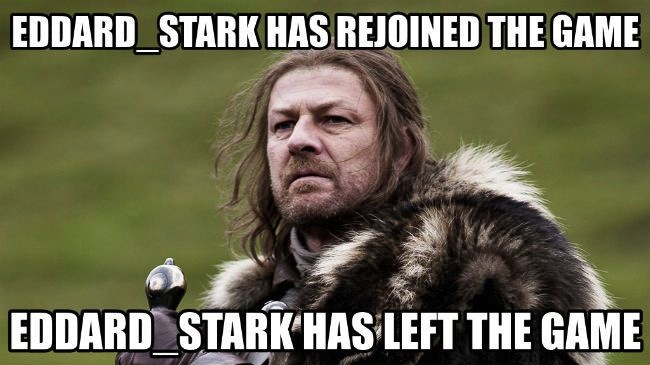 You know…I’ve been trying really hard all week to find a way to incorporate the Red Wedding into a blog post.  I mean surely there’s something.  For those of you that read and/or watch Game of Thrones, you know what I am talking about.  For those of you that don’t, I have nothing to say to you.  For anyone who simply isn’t caught up, yet…you may not want to read this post. 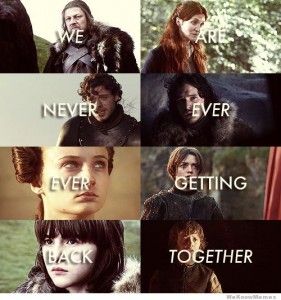 I was first going to write about how you should surround yourself with people you trust.  I mean, what good is a leader if he doesn’t have trusted advisors giving him both the good and the bad.  Helping him when he needs help and staying out of the way when he doesn’t.  And, most importantly, someone who won’t stab him in the stomach.  But…while poor Rob Stark was leary about Walder Frey (I mean, who wouldn’t trust the guy who’s had to clean up Hogwarts for the last however many years), but Roose Bolton was a trusted banner man and family friend.  How was anyone supposed to know that he was secretly in cahoots with the enemy?

Then, I was going to write about how important it is to keep your promises!  Rob promised to marry one of Lord Frey’s daughters.  If he hadn’t gone off and fallen in love with someone else, none of this would have happened.  But, that wasn’t right either.  I mean, leaders should be able to change their minds.  While I would never encourage someone to do it regularly, the ability to make a radical course change can be very beneficial when you find yourself going in the wrong direction.

Then, I thought about encouraging all of us, as HR folks, to always be aware of the ever changing world around us.  If Rob hadn’t gotten caught up in the mushiness of his wife naming their unborn baby after Ned Stark, he might have noticed that the band started playing “The Rains of Castamere” and maybe he would have been able to defend himself from the onslaught of arrows.  But, that’s still wrong.  Mostly because I can’t fill a whole post writing about that.

The Red Wedding sucked for all involved.  Clearly there were some failures in leadership.  Rob was the King in the North.  He’s dropped way too many balls.  Trusting Theon, allowing Winterfell to be sacked, letting Jamie escape.  And now, he’s allowing the mass murder of basically every Northman including his mother and his direwolf.  Not very kinglike.

So…after stewing and drafting and tossing and turning.  I came up with this HR lesson from the Red Wedding.

A Lannister always pays his debts.