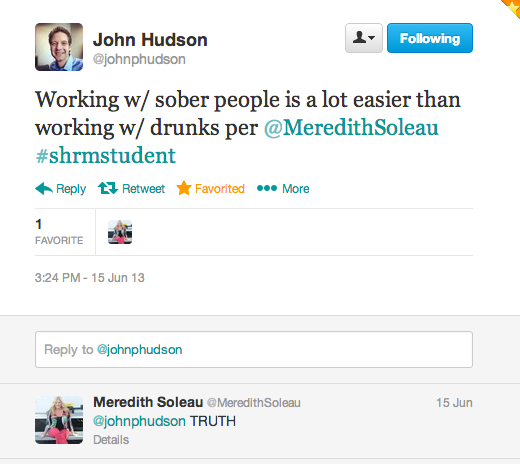 FOT was proud to take over a session at the SHRM Student conference on Saturday. The topic? 7 ways to find your first (or a better) HR job.

Of course, we gave them eight. Maybe nine. I’m not sure. Counting isn’t really our “thing”.

With Tim Sackett on the mic as the moderator, and Laurie Ruettimann, Jennifer McClure, and me (Meredith Soleau) on the panel – you can pretty much predict the session was about to turn into a Chelsea Handler show.

We. Were. Freaking. Hilarious.

Laurie pointed out that unpaid internships are soon to be a thing of the past. Recent court legislation is ruling in the favor of interns who were not paid, and this means we should stop getting HR work done for free.

So, if they aren’t going to pay you, and you do actual work – they should be paying you. Even if it is minimum wage, they need to pay up or shut up.

Internships looks great on resumes, and not all companies have budgets to pay an intern. So what’s someone looking for experience supposed to do? I have a solution! Ask someone to be your HR mentor. I was recently asked to be a mentor a college student. And at first I was all, “What’s in this for me?” and then I was all, “I don’t have to pay him, and he can follow me around and learn stuff. And when I teach things, I get better at things.” So ask someone to be your mentor. You can put it on a resume. Just call it a “Mentorship”. But don’t really do any work. Just go learn all the things.

VOLUNTEER FOR YOUR LOCAL SHRM CHAPTER

I found my HR job through my local SHRM chapter. It’s all about who you know, right? So know some people that may want to hire you.

The best way to get to know people is to sit on committees. I was the Social Chair for our SHRM chapter for two years. It sucked! I thought it would be fun to plan golf outings and parties, but it really isn’t. And when your real job gets in the way of your SHRM volunteer job, you realize it has gone too far. So I stepped down. I just didn’t have the time anymore. But if I had some young bucks ready to help me, it would have been awesome, and I would have moved mountains to help this person find a job.

Jennifer spoke to the group about finding a target company. She super hates it when someone is asking her to help them find a job, and she asks them where they want to work, and they just say, “In HR.”

Give us some ideas when you’re looking. Say things like, “I really like this XYZ Software firm. I want to do HR there.” Telling other HR Pros where you want to work specifically makes us think about other companies (similar to that company) that maybe you didn’t even know about.

And? Once you know your target companies, you know who you need to be tracking down on LinkedIn. Their HR person!

ASK YOUR DAD FOR HELP

Tim Sackett is the master of asking his parents for help. In his case, it was his mom. He runs her company now.

However, Laurie pointed out that networking with your parents’ friends is a really good idea. You can meet them at the golf course, at parties, or wherever parent-types hang out. Tell them you are seeking employment, and then beg them to send you leads. If no one knows you’re looking, no one will help you. Your job is finding a job, and sometimes word of mouth is the best way to do it.

Note: If you name drop people – ask them if it’s okay first.

GO WHERE THE JOBS ARE LOCATED

Want to work in oil? Don’t really care, you just need a job?

GREAT! North Dakota has jobs for you! [email subscribers click through to see video]

Jennifer points out that they’re looking for warm bodies, but we think it’s cold there. So pack a coat!

When I interviewed, it came down to the final two candidates, and the other candidate had experience as an intern for The Toledo Zoo. Which? That’s like a super popular zoo, you guys.

I had experience… as a bartender.

So I took that experience, and turned it into, “Hey! I have more people skills! And I can talk to anyone! And sober people are way easier to talk to than drunk people!”

Someone asked me if I still feel the same way about sober people during the session.

Laurie is super smart. She wants you all to read, read, read.

You can tell who is hiring when you read. What industry is taking a sudden boom? Did someone just go public? Who is winning awards? What company just received a massive grant? These people are going to spend that money. And lots of times, they spend it on people.

Laurie wants you to follow the money, and really get a job you want. Don’t just take the first offer. Follow that money!

Although sometimes you take a job making a baby amount of money and you end up really liking it and they promote you over and over (at least that’s what happened to me).

Jennifer began this with the one HR trick question. Do you know what it is? “Tell me something about yourself.”

TELL ME SOMETHING COOL. DON’T BE LAME.

Tim Sackett says you need a story. Like a 30 second pitch. His is about how he was raised by women. Mine is about how I was supposed to be a famous country music singer, but my parents made me go to college instead. Laurie super likes cats. But we all have something interesting to say.

So say something to Jen’s questions besides, “Uh… well… I am President of my business fraternity…”

Yeah, yeah, we will get to that. You put it on your resume. We want something not on that resume. You need to entertain us. Make us like you!

And also – as bad as it is – we are humans. And humans judge people by the way they look. So Laurie wants you all to find bras that fit. Because nothing is more distracting in that first five seconds we meet than staring at your boobie-muffin-top.

So, in conclusion, to get a job you need to:

Yep. That about covers it.

I doubt we’ll be asked back again next year. But I hope we are. For the kids…