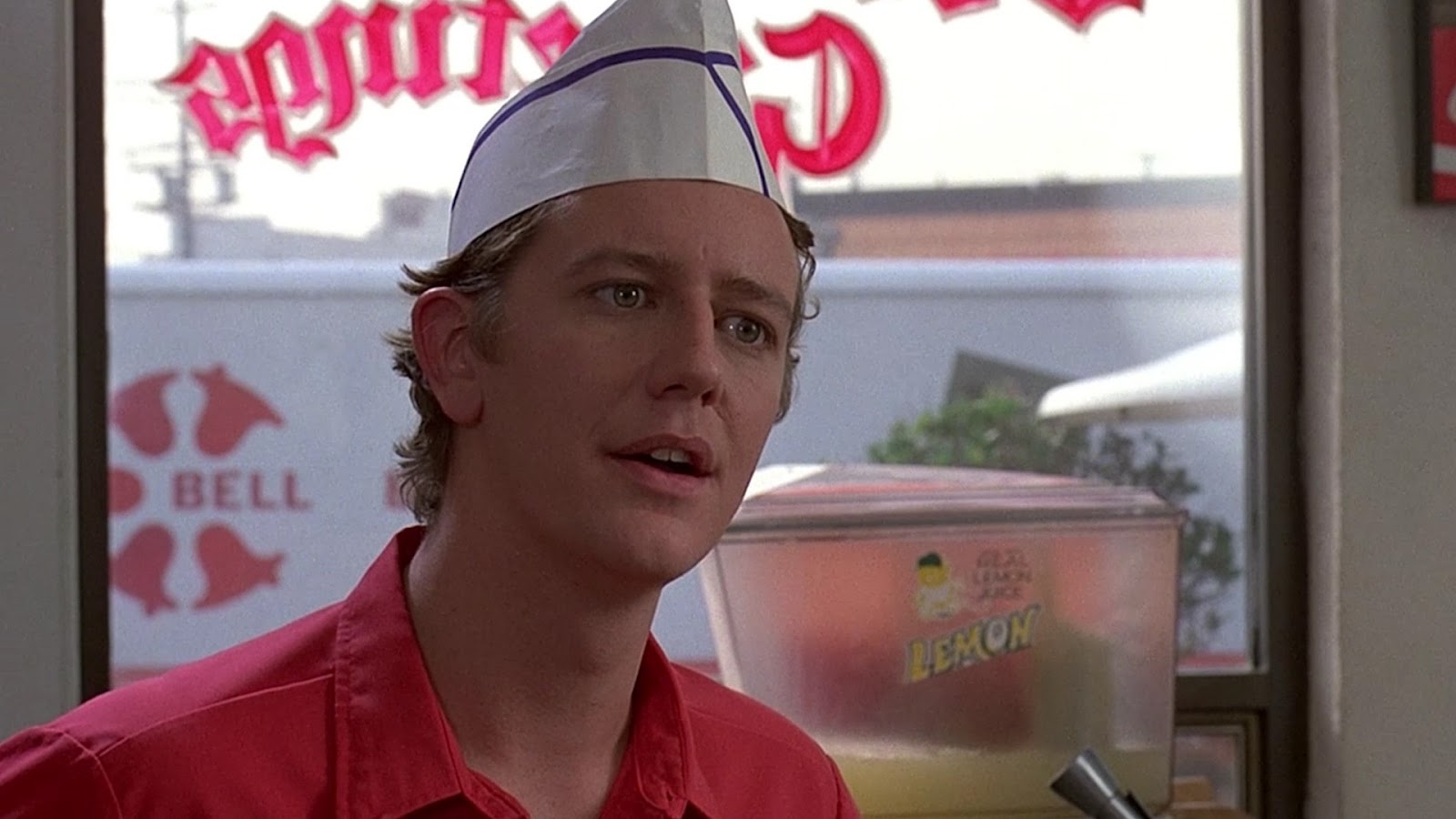 Once you graduate college and are handed the keys to the ‘adult world’, the days of working a mindless summer job are quickly replaced by meetings, deadlines and 401k plans. Summer – what used to be 3 mos of carefree living – is just a 12 week period where traffic is somewhat lighter than usual, allowing for an extra 15 minutes of snooze in the morning before you begin your commute. Sure you have trips planned, or maybe a week or two of vacation, but summer will never hold the same meaning it did when you were in your youth.

Inspired by the team at Slate, “Perhaps one of the most sorely missed charms is the venerable summer job, those short-term experiments in employment that provide not only a little spending money, but valuable life lessons as well. So, with Memorial Day just behind us, and the season officially in full swing, we pay homage to the summer job with a series of recollections—some traumatic, some glowing.”

Having done the “fast food gig” I looked for different employment that could pay for college.  I found it in the furniture moving business.  The moving business typically hires a lot of summer help because the vast majority of home moves occur in the warmer weather.  Typically there would be 8 – 10 “college” guys hired each summer.  The job required one to get a CDC – commercial driver’s license and REQUIRED you to join the union (yes – I am still a member of the AFL-CIO to this day – just in suspend mode…)

The company loved us college guys because… wait for it… we could READ!  Yep, you read that right – unfortunately guys I worked with couldn’t.  We were given all the jobs that required reading and writing and ciphering.  Don’t get me wrong.  This wasn’t 1880 – this was 1980.  In addition to being the guy who knew his “letters” I was able to expand my knowledge of the human condition as I …

It was by far the best paying and most educational summer job you can ever, ever have.  And I know how to back the heck out of a kitchen.

Somehow I always managed to spend every summer working more than one gig.  Summer between sophomore and junior year of college I spent in Maryland (my parents had moved that past fall, trying to elude me but failing miserably!) Working as camp counselor and as Snack Shack Gal on the 19th hole of a local country club.  The pay…eh….it was okay.  Not as fantastic as when I waitressed Bob’s Big Boy in Waukesha, Wisconsin.  But the tips….were fabulous.  Not so much from the female golfers, but the men? Always good….especially if they were playing beer golf.  (Somehow my Dad and Brother had failed to mention that concept of beer gold to me…)

Tips were grand, but the downside? The bees and the older male staff.  The bees in the shack? Formidable…and loved the soda fountain. By the end of the summer I was use to getting stung every time I pulled the lever for a Pepsi.  The older Male staff? Similar concept, nice introduction to inappropriate male behavior from male colleagues…and you definitely had to avoid getting stung!  I learned a lot about people that summer….

I actually loved my summer jobs at the local Y.  First, they hired me when I was 15 because I was “mature for my age”.  Then as an added bonus to lifeguarding, I was trained to teach swim lessons.  It didn’t take me too long to figure out I could teach a few lessons in the morning and then promote “private” lessons in the afternoons and on my days off.  The extra cash I made over the course of 4 summers, a college scholarship I received from the organization, plus a killer tan – well… ROCKED.

The downsides were being in a wet, one-piece swimsuit from 8am-8pm most days – and getting to clean the bathrooms at the pool on an hourly basis.  To this day I don’t understand little boy’s fascination with peeing everywhere BUT the toilet.

Kris Dunn – “You Need That Ham Sliced Ma’am?” & “We’ll Be Back in 10 Seconds on the Royals Baseball Network”

Worst – was working at a grocery store, bagging groceries.  Was stocking some shelves and saw the classic KD opportunity to exceed expectations.  Some lady was looking for a ham to be sliced and guess what?  Sure – young KD jumps behind the counter and takes care of it – and proceeds to clip half the top digit of my thumb with the blade.  Luckily, the digit got saved because my thumbnail stopped the blade.. I can still see the slice mark.  #goodtimes #childlaborlaws

Best – After my thumb got cut off, I went to the local radio station and got a job as a DJ, with my summers filled plugging in station IDs on the KC Royals baseball network.  No meat saws.  #best #job #ever  Bonus – we were country in the daytime, top 40 at night.  Only in America.

You know how it sucks to catch a cold in the summer? Well here goes…

Worst – was the summer I spent working as an order picker in a giant, perishable food distribution warehouse. Think of it as rooting around your refrigerator for 8 hours at a shot, if your refrigerator was the size of about 10 football fields and grabbing some OJ doesn’t mean taking a swig from a bottle of Tropicana, it means stacking a few dozen cases of 64 oz. jugs on a motorized pallet jack and racing off to the cured meats aisle. And did I mention it was third shift? Nothing like taking a break at 3AM to go outside to warm up in July.

Best – After spending the prior summer in a freezer, I vowed to stay outside the next summer, and landed a dream gig – on the grounds maintenance crew at the largest cemetery in the area. It was quiet, I got to operate all kinds of cool equipment (most of which I was totally unqualified for), I got a really good tan, and every so often I got to hang out with the ‘permanent’ workers on the crew, whose main form of employee engagement involved having a few beers in the afternoon and finding a shady spot to park the truck under and have a snooze. People were dying to work there, I mean that.

Tim Sackett – This Job Is For the Monkeys

Worst – Spent a Summer in college working the 5am to 11am shift as the check-in/towel boy of the Women’s locker at the student gymnasium at the University of Wyoming.  It was the worst only because it was summer, only 3 women worked out at this facility during my shift and I had to get up at 4:30am!  Eventually, the 3 women and I came to an understanding -I’d place 3 towels in the window and they let me sleep at the desk.  They would wake me when they left around 9am – they were sweet ladies.  I did actually read “War and Peace” that summer because of the boredom I faced in that job – so not all bad!  As an HR Pro – I still have no answer how they selected a male in this position.

Best – I was the supervisor at the first 20 screen movie theater in North America – who happen to also own the local zoo concessions.  I had a boss ask me to run the zoo concessions one summer which entailed picking 3 friends to work with me at the zoo where hardly anyone ever came.  My days that summer consisted of sitting under an umbrella of an ice cream cart next to ‘Monkey Island’ eating free ice cream and listening to my super-new-cool Walkman!  God I miss that job!   I also worked at a small old peoples’ drive-up liquor store while in college – that was a pretty great job as well! No one came after 7pm – we’re open until 10pm – I had all I could drink and a TV.  It was a cheap way to start off my weekend nights.

Worst—Hospital cafeteria worker. Summer jobs are hard to come by in a college town where 80% of the population leaves to go back home. Thankfully, old sick people need their Jello, so I got picked up at the local hospital. You have not seen the failures of the US educational system until you have worked in the bowels of a small town hospital.

Best—Golf course grounds crew. At 14, I got to play golf for free, drive golf carts, and eat more hot dogs and hamburgers than any one person should. I walked around waiting for the Caddyshack shenanigans to break out, but I missed out. My friends called me Noonan for months.

Best – One summer my friend Jamie and I decided to start a landscaping company (ironic since we knew nothing about landscaping) and called it Quality Landscaping.  Between the two of us though we called it Two Dicks Landscaping since we would drive around in a white 1985 Monte Carlo with the trunk tied down to keep the lawnmower in place.  (We looked like a couple of dicks).  Our very first job was a real landscaping job for which we were paid $2,000.  We were 17 years old and this was more than we thought we’d make the entire summer.  We cashed the check and I’ll never forget sitting in my friend’s house just counting our $100 bills.  After that, success went to our heads.  We landed a few more gigs but within a couple of weeks we decided we had enough money to just take the rest of the summer off.

Worst –  I worked at Friendly’s I was the guy who did all the grunt jobs (washing dishes, prepping food in a tiny back room and in one particularly memorable experience cleaning the bathroom after a customer had an “accident”).  At the time I was making minimum wage.  So I worked up the courage to ask the store manager for a .25 raise.  He said no and that I needed to work harder.  Now mind you, given I only worked a handful of hours per week if he had opened his wallet and gave me a $10 it would have covered my entire raise.  But he didn’t.  Obviously this wasn’t about the money.  It was about recognizing hard work which he didn’t care to do.  So I quit.

Best – The summer between my freshman and sophomore year of college I worked at a summer camp where I reigned supreme over 30 little kids that just wrapped Kindergarten. My days consisted of air hockey, dodge ball, Snack Pack, Connect Four and a number of trips to local water parks, ice skating rinks, and other south Florida attractions. The highlight of the summer was when we took the kids to Lion Country Safari on a charter bus. Every time we turned the corner and came to the next patch of animals, they would run to whatever side of the bus the animals were on and smush their faces agains the glass and start belting the sound of that animal. Priceless.

Worst – That same summer I was still working at Walgreens on the weekends, meaning I was working 7 days a week for 12 weeks. Bad for the social life, good for the bank account. I may have left the part out in the blurb above where we “watched movies” after lunch hour.

Do you have a best/worst summer job? Hit us in the comments…