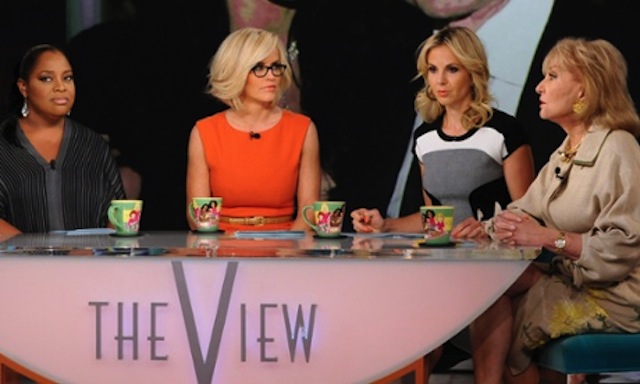 I am fascinated by high profile hiring decisions. There is something about the drama that goes into hiring someone like Marissa Mayer that inspires tales of politics and intrigue, and I eat it up.  Jenny McCarthy is the most recent example, and I think ABC’s decision to hire her perfectly shows the rub that goes on in corporations every day between conflicting priorities and power players. For ABC, it’s obvious that someone in marketing or sales exerted more power than anyone else in the room. Especially HR.

Below, I have taken a stab at the dialogue that might have happened inside the debrief room at ABC right after they interviewed McCarthy for a host spot on the weirdly popular show, The View. Is it factual? No. Is it honest? Absolutely not. Is it entertaining and perhaps closer to the truth than anyone at ABC wants to admit? I think so.

VP of Marketing: Well, folks, I loved her. I think she’s great. Bright, smart, beautiful. What’s not to like?

VP of HR: Well, there are some people who think she’s a bagful of crazy. Her association with the anti-vaccine movement is polarizing. Here’s a quote you can expect right after we hire her:

“Jenny McCarthy…will be the show’s first co-host whose dangerous views on childhood vaccination may — if only indirectly — have contributed to the sickness and death of people throughout the Western world. Executives at ABC should be ashamed of themselves for offering McCarthy a regular platform on which she can peddle denialism and fear to the parents of young children who may have legitimate questions about vaccine safety. … It’s a strike against reason and progress and hope. That is a cost that the network won’t be able to afford for long, and neither will the rest of us.”

VP of Marketing: OMG, do you know how hard it is to buy that kind of exposure? Told you; I love her.

VP of Legal: I don’t know, Bob. It will get worse; the Boston Globe online will run a headline titled, “ABC’s hiring of Jenny McCarthy: a decision that could cost lives.” Are we really going make that decision?

VP of Marketing: Two words, Tom: Hell, yes. Our business is ratings, folks, and this hire drives ratings. We’ve pushed The Bachelor as far as that gravy train will go. We need this hire.

A 1994 Playmate of the Year, she rose to fame as co-host of the MTV dating show “Singled Out,” where her raunchy sense of humor and buxom blond looks made her popular with men and women alike. After leaving that program, she dabbled in TV and film roles until 2005, …McCarthy has since written several books about (autism) and remains perhaps the best-known celebrity advocate of the theory tying autism to vaccinations.

VP of Marketing: Perfect. Playmate of the Year, crusading Mom, battling against the establishment. Freaking perfect.

VP of HR: So, I googled her, and the LA Times notes there was a website, originally titled “The Jenny McCarthy Body Count,” charting the number of deaths due to preventable diseases since 2007, when McCarthy first began to speak out on the subject.

VP of Marketing: Glad to see you are with me, Helen. Body count, people. There was a website tracking her body count. Ratings gold. Ask yourself what pays the bills here. Ratings. She will get ratings, and we will pay bills. Enough discussion–we’re doing it.

Game. Set. Match. Marketing moves on in this tournament.