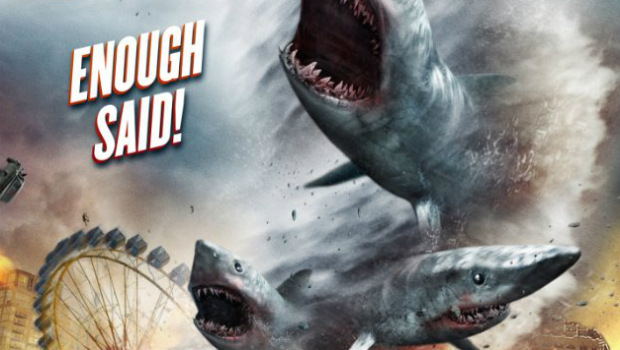 I’m going to make two assumptions at the top of this piece, both I think are valid, and both are important for you to buy-in to before reading any further.

One – You (probably) did not watch the recent SyFy Network movie Sharknado.

Two – Despite not having watched the movie, you likely are familiar with it, probably from the amazing response to the movie’s airing on social media.

Here’s the setup in case you have no idea what I am talking about… The cable network SyFy produces about 24 original made-for-TV movies each year and whose subject matter tends towards the bizarre, outlandish, and campy.  Past titles in the series include such classics as Dinocroc, Mansquito, and Megapython vs. Gatoroid. Last week with the airing of Sharknado, the network broke new ground, not with the film’s actual ratings (the traditional measure of TV-show success), but with the tremendous level of buzz and conversation about the movie, mostly on Twitter.

These two pieces of information – the relatively low ratings coupled with the huge upsurge in social media chatter, underpin the assumptions I made at the top. You probably didn’t watch the movie, but you probably did hear something about it and are at least familiar with it in passing.

Why is any of this important, or said differently (and I promised myself I would not use this lame question as the title of the post), what can we as talent pros learn from Sharknado?

The title (or branding) is half of the battle. In a 2011 interview SyFy Executive Producer Thomas Vitale stated it clearly – ‘If we don’t have a good title, we are not going to make the movie.’

Does whatever program you are pushing, (or being told to push), in your organization have a catchy title? Does it make people stop and donate even a few seconds of their short-attention-span dominated day? Or is it something that is totally expected and easily ignored like the ‘2013/14 Goal Alignment Process’.

Target market identification. While the overall ratings for Sharknado were not all that stellar, the movie did draw well with selected and desired sub-markets that SyFy believes are important for them to reach. It did really well with younger viewers, and really, really well with that connected, active, and socially networked cohort that drove all the online buzz.

What is your takeaway in HR and Talent? There is almost no way any of your programs will connect with everyone in your organization. What matters to the college hires and the early career group does not resonate with folks somewhere farther up the chain, and is completely meaningless to the fat cats with the big offices.

Big Picture View. The folks at SyFy are looking at their overall goals as an organization with a long-term and comprehensive strategy involving ratings, brand awareness, and most importantly, towards the development of a set of passionate and interested fans. Focusing on one distinct data point, the total rating for one movie on one night, misses the forest for the trees. Sure the rating matters, but lots of other elements matter too, and the smart leaders don’t lose sight of the big picture.

The lesson here for the savvy talent pro, especially in this age of Big Data and analytics for HR?

Don’t get caught chasing or putting too much weight into any singular or individual data point or measurement. A number or measurement by itself can tell you something, but it can’t tell you everything, and it may not tell you anything.

Sharknado was probably pretty dumb. But maybe dumb like a fox. Or dumb like a shark caught in a tornado.